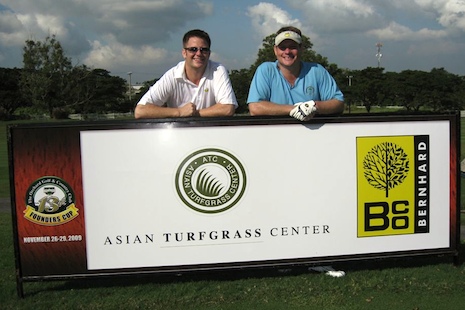 I was at the Philippines last week to play in the Founders Cup tournament at The Orchard Golf and Country Club. As sponsors of the tournament, Asian Turfgrass Center along with Bernhard and Company were able to enter a team in the sponsors division, and playing off scratch (I don't have an official handicap at present, unfortunately!) along with Steve Wilson, Business Development Manager Asia Pacific for Bernhard, we made a respectable showing at the challenging Palmer and Player courses over which the tournament was contested. The Palmer course has Tifeagle bermudagrass greens, while the Player course has greens of Sea Isle 2000 seashore paspalum. During the tournament, course superintendent Jelly Palmes had the greens on both courses in excellent condition, rolling at a good speed and providing a superb playing surface. Below is the 7th green of the Player course, showing its seashore paspalum green with the par five 9th hole in the background. 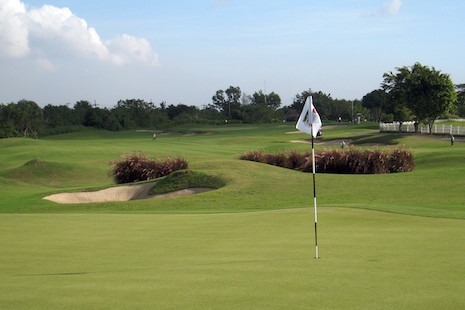 I had planned to be at the Philippines for the Founders Cup and to meet other friends in the golf course industry. It turned into a busy week, as I visited Manila Golf Club on the day of my arrival, played in the Chairman's Cup tournament at Sherwood Hills the next morning, went to Wack Wack Country Club and saw the renovation project there, and played practice rounds at Orchard for the Founders Cup. In less than five days I had been to five different golf courses, and later in the week I also went to Manila Southwoods and to TAT Filipinas. 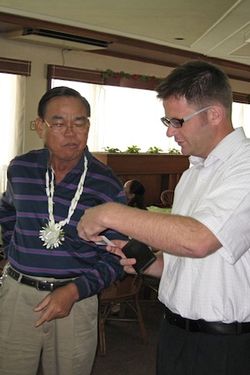 I was at TAT Filipinas Golf Club in October for a turfgrass advisory visit and I was there again this week to meet delegates from the East Asian Seas Congress 2009 who were making a field trip to see the sustainability initiatives at TAT Filipinas under the direction of club president Edna Paña and manager Joe Dagdagan. I spoke with Dr. Mok Mareth (pictured at right), the Senior Minister of Cambodia's Ministry of Environment. We discussed golf and the environment, two subjects which Dr. Mareth and I are both passionate about.