Handheld or Backpack Sprayer Calibration
What Fertilizer is Best for Zoysiagrass?

Which is a Stronger Grass, Paspalum or Zoysia? 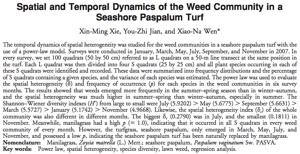 One of the most interesting research papers I have read in the past few years is this one, entitled "Spatial and Temporal Dynamics of the Weed Community in a Seashore Paspalum Turf," by Xie et al. from South China Agricultural University. With a title like that, I expected the article to explain what weeds were found in a seashore paspalum turf, where those weeds were, and when those weeds invaded. Were the weeds at the edge of the seashore paspalum area, or were they on a high spot, or in a low area with wet soil, or were the weeds particularly intense in their invasion at certain times of the year? The actual result of this experiment, however, was somewhat unexpected, and is less related to dynamics of a weed community in seashore paspalum than it is to the fitness of seashore paspalum as a turfgrass in Southeast Asia. And this is something that everyone involved in the maintenance of turfgrass in Asia should be aware of.

The experimental results published in Weed Science found that weeds emerged most frequently during the spring and summer at the experimental site at Guangzhou. No surprise there. But what is most surprising is this, and I quote from the researchers in their article: "the seashore paspalum turf has been naturally replaced by manilagrass." Manilagrass is Zoysia matrella. 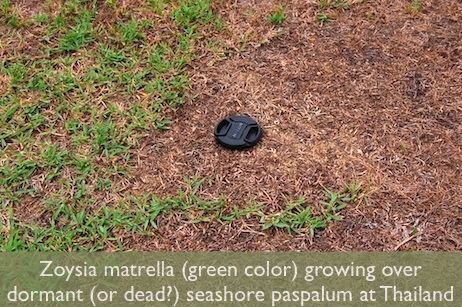 The image above shows an area at the Asian Turfgrass Center's research facility that was planted to seashore paspalum and was maintained similar to a golf course fairway for three years, with regular fertilizer and irrigation applications and mowing every two days. During that time of regular maintenance, the paspalum grew fine. But in 2009, when we implemented a reduced maintenance program, with no irrigation and reduced frequency of mowing and reduced fertilization, the Salam seashore paspalum went dormant and in some areas was completely overtaken by other grasses, such as the manilagrass as shown above.