An Interesting Technique to Modify Fairway Conditions in Thailand 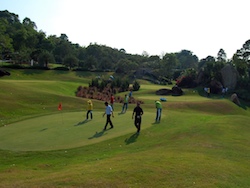 Many of you will be familiar with the Laem Chabang International Country Club and its typical (for courses built in the 1990's) Tifdwarf bermudagrass greens and Tifway 419 bermudagrass fairways. Laem Chabang has been one of the sites for the Asian Turfgrass Field Day in recent years. Bermudagrass in this part of Thailand is notorious for having a high susceptibility to weed invasion, especially during the rainy season, and to require large amounts of nitrogen fertilizer to produce the desired surface. Seashore paspalum, as you know, performs better than bermudagrass in wet soils, and has a lower nitrogen requirement once established than does hybrid bermudagrass.

At the Sustainable Turfgrass Management in Asia 2009 seminars, I advocated the tolerance of, and sometimes even the deliberate planting of, turfgrass polystands in fairways and roughs. Why? Because the various attributes of the turfgrasses used in Southeast Asia can be complementary when the species are grown together, and the grasses are very difficult to eradicate when they begin to invade a monostand of a different species. 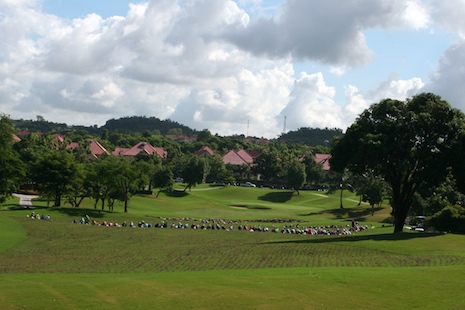 How many courses in Southeast Asia that try to have a seashore paspalum monostand fight bermuda as a weed? I would venture to say that all do, and especially in areas with poor irrigation coverage or where the turf is maintained at moderate to high mowing heights, I suggest that in the long term it is a losing battle. Bermuda will outperform paspalum in those areas. How many courses trying to maintain a bermuda monostand fight zoysia encroachment? Many do, and it is usually the zoysia areas that get larger and larger. And seashore paspalum can invade zoysia and bermuda as well — all this is natural. Why not take advantage of these grasses that seem to want to grow, and manage them to create a visually attractive playing surface? 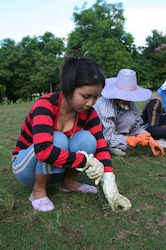 At Laem Chabang, the Tifway 419 fairways were sliced on 10 cm centers and then caddies from the club planted individual plants of seashore paspalum into the fairways. How long does that take, you might wonder? About eight hours of work for 200 caddies to do one par 5 fairway.

After this slicing and planting of paspalum the fairways were topdressed with sand, and then it was maintenance as usual. I visited Laem Chabang five months after seashore paspalum was introduced to this fairway, and I found the conditions and the appearance of the fairway to be very good. The striping and color of the fairway appeared as would a paspalum fairway, but there is still a large amount of bermuda in the fairway. I expect that in wet areas and during the rainy season the paspalum will grow well and provide a dense turf cover when bermuda would not, and that during the dry season the bermuda will thrive and provide a dense turf cover when the paspalum would require large amounts of supplemental irrigation to produce such a surface during that season. 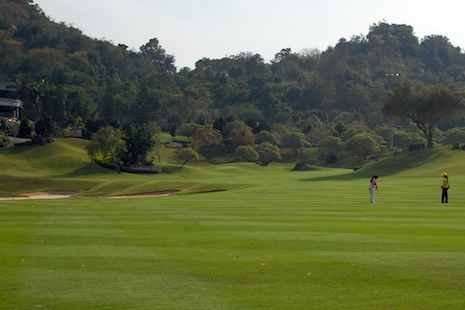 Thanks to course superintendent Mr. Boonthong Ngamsapang for the photos of the seashore paspalum planting process.