Research on Weed Populations in Malaysia 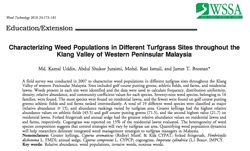 In total, 79 different weed species were identified in this survey, with 63 of the species being found in lawns, 29 on athletic fields, 25 on sod farms, and 23 on golf courses. Some of the most pervasive weeds were the sedges Cyperus aromaticus and Cyperus compressus along with grasses Chrysopogon aciculatus, Eleusine indica, and Digitaria fuscescens.