Calcium for Turfgrass: is there enough in the soil?
How Much Calcium Does Turfgrass Require? 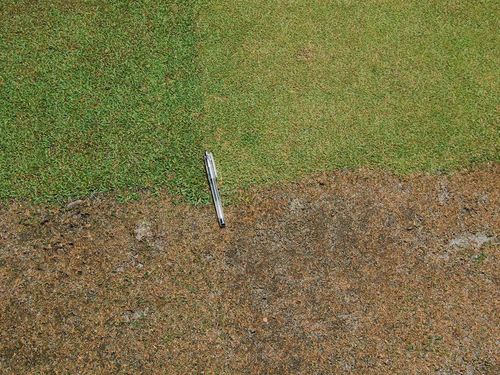 There are four grasses in the image above (click on it to get a larger view). We are looking at Tifeagle and Novotek (both are Cynodon hybrids), Sea Isle Supreme (Paspalum vaginatum), and a fine-bladed zoysia, probably Zoysia pacifica. This is a test on a shaded green in Manila. The green is maintained for seashore paspalum. The seashore paspalum can handle this shade, although it has a relatively coarse leaf blade compared to the zoysia. Both types of Cynodon fail to produce an acceptable putting surface in this type of shaded condition under which both seashore paspalum and zoysia can produce a good stand of turf. 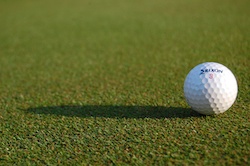 In fact, this zoysia produces a really superb putting surface, as seen at right, a photo I took on the 18th green at Wack Wack Golf and Country Club during last week's Philippine Open. It requires very little in the way of fertilizer, few pesticides, and is able to tolerate the low sunshine levels and tree or building shade that can cause Cynodon, with its higher light requirement, to fail. Wack Wack recently underwent a renovation and the Club made a wise choice to keep the native zoysia on greens and the native carpetgrass everywhere else. There are beautiful mature trees across the property, and other grasses would not produce such fine surfaces in these low light conditions, but the zoysia and Axonopus thrive. 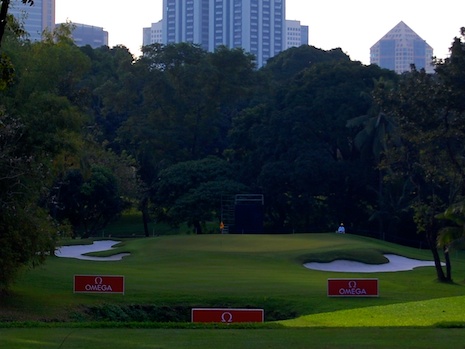 Many people ask me "what type of zoysia is that?" My best answer is that it is probably a type of Zoysia pacifica (previously called Zoysia tenuifolia), and I base that on a paper published in 2005 by Akamine et al. in volume 33 of the Journal of the Japanese Society of Turfgrass Science entitled "Morphological Characteristics of Zoysia tenuifolia Willd." In the research project reported in that paper, Akamine et al. found that Z. pacifica leaves are folded in the sheath, as compared to Z. matrella leaves which are rolled in the sheath. Upon close inspection, I found that the fine-bladed zoysia from the greens at Wack Wack has folded leaves, while the leaves of a typical Zoysia matrella from Japan were rolled.