Turfgrass Mystery: what grass is this?

You may be surprised at the answer. What grass is referred to here? From an article by Charles Vancouver Piper, first chairman of the USGA Green Section:

"________ is the best of all grasses in the South for fairways. It makes a dense, uniform turf even on pure sands and the leaves are stiff enough so that the ball is always well off the ground. The only other grass to compete with it is Bermuda; but under conditions where both will grow, _________ makes far superior turf."

Please leave a comment here or reply on twitter with the answer. I'll post the answer and some descriptive photos in a few days. And here it is: 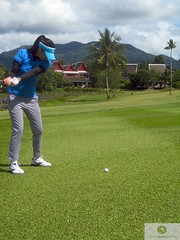 The grass Piper was referring to is broadleaf carpetgrass, Axonopus compressus. Read the article here, from the December 1921 issue of the Green Section Record. Thanks to Captain Ben Sims, Jason Chennault, Jim Prusa, Scott McVey, and John Dempsey who all gave the answer of carpetgrass or the genus Axonopus. At right, the beautiful carpetgrass fairways of Laguna National Golf Club in Phuket.

Carpetgrass was a bit of a surprise to be mentioned in this way, and I received a lot of comments from people who said they don't like the grass. Perhaps in an area with a lot of sunshine, and a relatively high maintenance budget, bermudagrass would be a better choice. But there are a lot of areas in the world where carpetgrass thrives and provides the type of playing surface that no other grass can. Just yesterday, I played the famous course at Nuwara Eliya, on stunning carpetgrass fairways (note that these are Axonopus affinis, similar but not the same species as referenced by Piper). See below.

At this course, the fairways are pesticide free. Weed-free too, except for a few other naturalized grasses that come in. And in the salubrious climate of Nuwara Eliya, the fairways are mown less than five times a month. 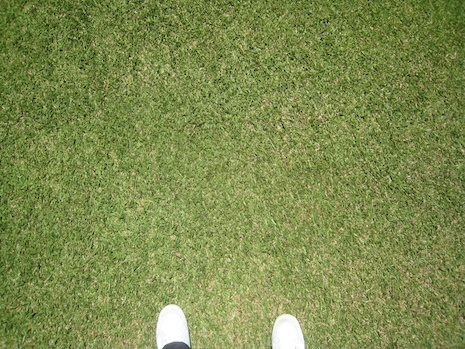 For more information, have a look at this photo gallery, read this article about Manila's Wack Wack Golf and Country Club, and see this article I wrote about C.V. Piper, who made the stunning statement about carpetgrass in the first place!