Turfgrass Mystery: can you identify the grass on this putting green?
Overseeded (or not) Fairways in Japan 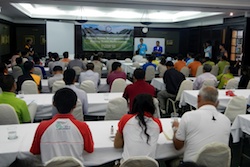 Today 110 people attended the Thai GCSA meeting at The Vintage Club near Bangkok. I gave a presentation on Putting Green Management and Putting Green Performance. This dealt with the main reason for poor performance of sand-based putting greens – the accumulation of too much organic matter.

The presentation slides can be downloaded here. 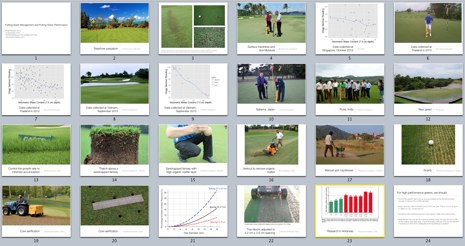 In my talk, I first mentioned the three main problems we have with turfgrass surfaces that are wet and soft because of too much organic matter in the soil.

I shared some data collected over the past year that shows an increase in soil moisture in a sand rootzone will usually lead to softer surfaces. We looked at a clip from a classic video of water movement in soils, to see what happens as water moves from a relatively fine-textured (sand + organic matter) layer down to a coarse-textured (sand without organic matter) layer, and then we discussed the four ways in which we can manage soil organic matter. Of these, I think the first two are the most important. 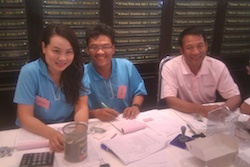 I would like to thank the TGCSA for inviting me to speak today and for all the superintendents who attended. I spoke at a TGCSA seminar at The Vintage Club when I was just starting with the Asian Turfgrass Center in 2006, and it was fun to be back six years later, with about twice as many people in the room, to be presenting about things that we have learned, based on research conducted here in Thailand and in other parts of Asia.

For more information, see these documents:

Aeration and Topdressing for the 21st Century (Hartwiger and O'Brien, 2003, Green Section Record)