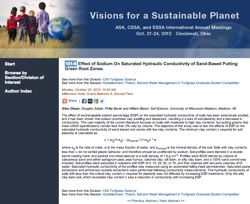 Sand rootzones are common the world over for golf course putting greens. Many athletic fields are also built with a sand rootzone, and in Asia, many of the tees, fairways, and even roughs are grown in a sand rootzone. Is sodium a problem for structure of these soils? The answer is a resounding NO.

From the chapter Warm-season Turfgrass Fertilization by Snyder et al. in the Handbook of Turfgrass Management and Physiology, we learn that the "very sandy soils that often are used for golf greens and athletic fields have no structure and are largely unaffected by sodium."

Research presented at the 2012 Crop Science Society of America Annual Meeting by Obear et al. also showed that extremely high levels of sodium have no effect on the saturated hydraulic conductivity of sand rootzones. In this paper, Effect of Sodium On Saturated Hydraulic Conductivity of Sand-Based Putting Green Root Zones, sand, sand with various amendments, and a silty clay loam, were saturated with waters of varying sodium levels. The saturating solution with the highest amount of sodium had a sodium adsorption ratio (SAR) of 80, which is extremely high.

But when the saturated hydraulic conductivity of the soils was measured, none of the sands, even those with the highest amounts of sodium, had a decrease in water movement through the profile.

There are a few reasons to pay attention to sodium. In soils with appreciable levels of clay, soil structure can be negatively affected by sodium. If rapid blight is a possibility at one's property, then the soil sodium should be kept at less than 110 ppm. And one should be aware of the electrical conductivity (ECw) of the irrigation water and of the soil (ECe). Sodium can be a major contributor to that, and if the ECe approaches the threshold level for a species, steps should be taken to manage the soil salinity.

But sodium and soil structure in sand rootzones? That is not something to be concerned about.