Using Waterfall Charts to Look at Soil Nutrient Levels: potassium as an example 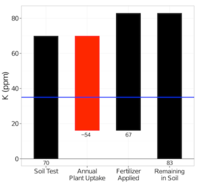 I have recently described a method that can be used to estimate nutrient requirements for any turfgrass, grown at any location. This method makes use of the temperature-based growth potential and the minimum levels for sustainable nutrition (MLSN) guidelines.

This method makes a few basic assumptions about turfgrass management.

This is essentially a mass balance approach, in which we consider the rootzone and the turfgrass as a system and we account for the nutrients that enter and leave that system. We can use a waterfall chart to visualize the individual and cumulative effects of the nutrient addition and the nutrient loss from our turfgrass and rootzone system.

This type of chart is described on Wikipedia as:

The waterfall chart is normally used for understanding how an initial value is affected by a series of intermediate positive or negative values. Usually the initial and the final values are represented by whole columns, while the intermediate values are denoted by floating columns. The columns are color-coded for distinguishing between positive and negative values.

Let's look at potassium (K) as an example, developing the chart step-by-step. I first make a frame for the chart. I've labeled the y-axis with K expressed in units of ppm (mg/kg). 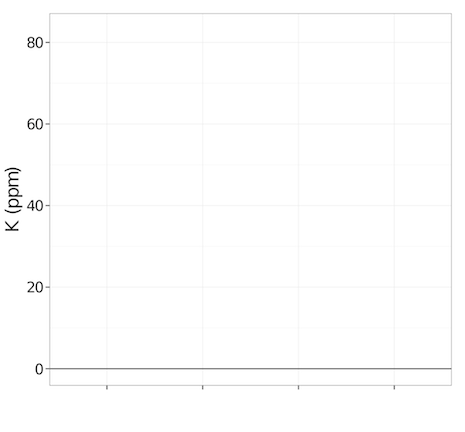 Next, I draw a horizontal line, in blue. 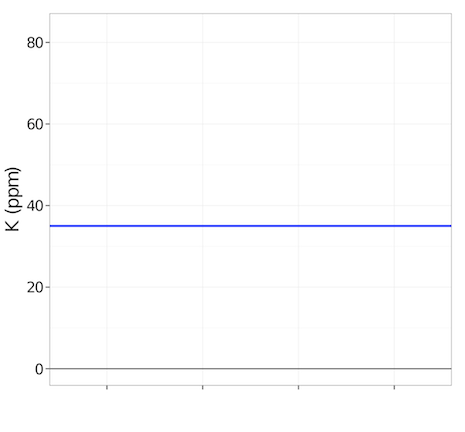 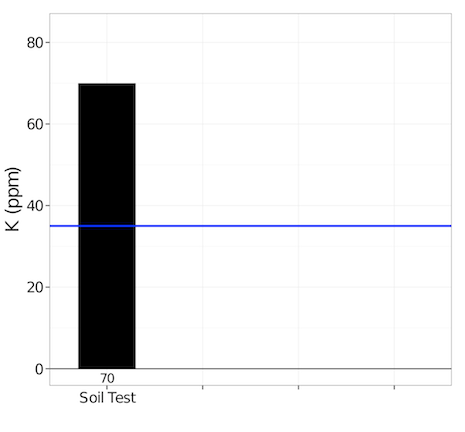 Then I add on a column to represent the amount of K actually in the soil, as determined by a soil nutrient analysis. In this example case, the soil test value is 70 ppm. This is a typical value for Mehlich 3 K in a sand rootzone. Note that this is more than the 35 ppm MLSN guideline, and we consider this soil test level as our starting point. Any positive amount of an element, or an addition of that element to the system, I will represent with a black color. Any loss of an element from the system will be represented in red. 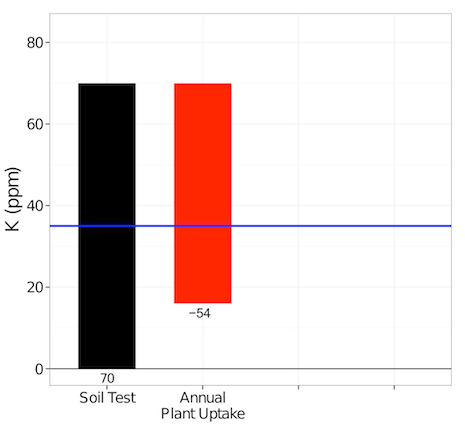 Next I add a column for annual plant uptake. This is based on the assumption that leaf clippings will be collected and removed from the system. This removes whatever elements are in the leaf clippings, including K. We can note a few things here: 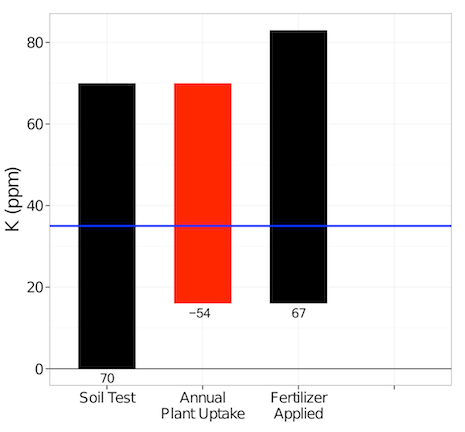 But we don't want the K to drop below the MLSN guideline. To prevent this, some K will be applied as fertilizer. Let's look at the chart now that the "Fertilizer Applied" column has been added. 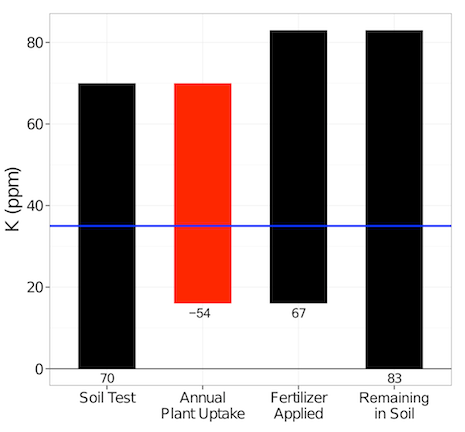 To complete the chart, I add a final column, to show the amount of K "Remaining in Soil". This column has a length of 83, showing that there is 83 ppm of K in the system. This is 70 minus 54 plus 67. And it indicates that when we have a starting level of 70 ppm of K in the soil, with a harvest through plant uptake of 54 ppm, and a fertilizer addition of 67 ppm, then we expect to have 83 ppm of K remaining in the system (in the soil) and that this level is well above the MLSN guideline.

I find this to be an interesting graphical approach to depicting soil nutrient levels and their relationship to the MLSN guidelines. If we would look at nitrogen, or calcium, or magnesium, or phosphorus, using this approach, we can understand more clearly how the amount in the soil is related to the plant uptake, and how that helps to determine the annual nutrient requirement as fertilizer.