Manilagrass Tees and Divot Problems, Fact or Fallacy?
10 Years Ago Today, a Startling Observation About Potassium and Snow Mold

I have decscribed how a waterfall chart can be used to show the nutrients that enter and leave a system, using potassium as an example. In that example, I did not show any input of potassium from irrigation water or rainfall, because I made the assumption that those inputs would be negligible. David Kuypers, the Golf Course & Grounds Superintendent at Cutten Fields in Guelph, Ontario, asked what would happen with sodium (Na) added through irrigation water:

@asianturfgrass Any need to account for an input through irrigation water? Average here is 110ppm for Na. Impact reflected in soil test?

That is an excellent question, and this chart for Na shows what may happen with that element. 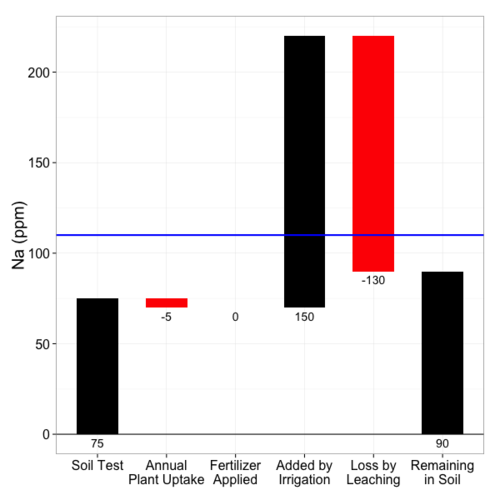 Let's look at a few components of this waterfall chart.

For more about maintaining soil Na below 110 ppm, see this document from PACE Turf.