Turfgrass Management on a Different Scale 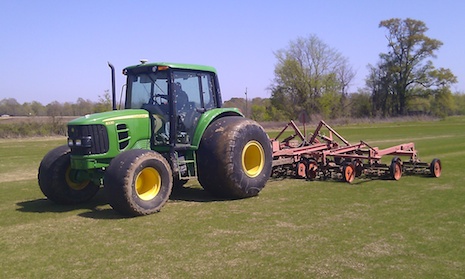 Last week I visited three sod farms near Memphis with Dr. Jim Brosnan from the University of Tennessee, where I am an adjunct professor in the Department of Plant Sciences. We saw grass production on a different scale to what I am used to seeing on golf courses and sports fields. The mowers are a lot bigger, and so are the sod cutters and all the other equipment used to plant, maintain, and harvest these huge fields of turf. 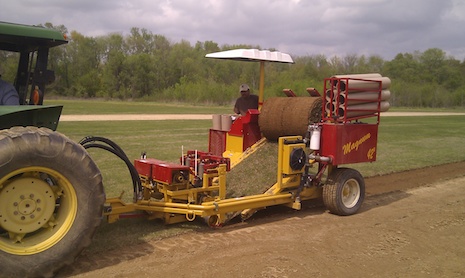 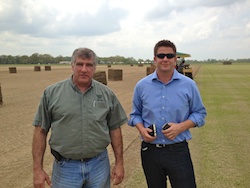 I got to meet Bobby Winstead of Winstead Turf Farms, current president of Turfgrass Producers International (TPI). His farm is growing some of the popular new varieties such as Celebration and Discovery bermudagrasses and Palisades and Royal zoysiagrasses.

We also went to Battle Sod Farm in the Mississippi Delta and McCurdy Sod Farms in Dyer, Tennessee. We learned about irrigation and drainage of the huge sod fields, which are often watered by center pivot irrigation. We saw different types of verticutters and sprigging and plugging machines, all of which allow grass to be planted and grown and harvested at a scale I had never seen before. 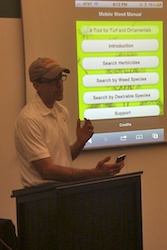 Dr. Brosnan and I spoke at the monthly meeting of the Midsouth Turfgrass Council, where he introduced a new mobile weed manual and I explained how manilagrass sod is produced near Bangkok. In the United States, turfgrass production in general is very much mechanized, and the growth of manilagrass specifically is slow because of the temperate climate, with it taking more than a year to get a harvestable crop. At Thailand, the situation is almost completely reversed. Turfgrass production in general is almost entirely done manually, and manilagrass sod can be produced in five or six weeks, because it grows so well in the tropical climate.