Turfgrass Mystery at the sod farm 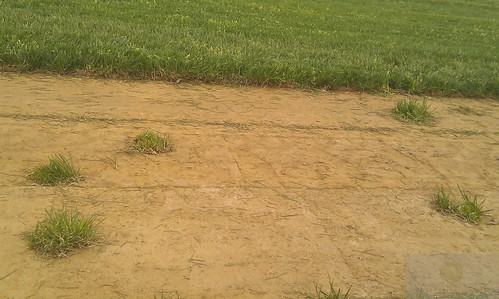 I recently visited a sod farm in Tennessee and saw these sinkholes in a field of tall fescue (Festuca arundinacea). After the sod cutter went across the field and the individual pieces of sod were lifted, it became apparent that there was some tall fescue growing below grade.

This machine, shown here harvesting a field of hybrid bermudagrass (Cynodon), was used to cut the field of tall fescue.

I asked, "Can you identify what has caused this phenomenon?" There were many responses before the correct answer was given.

Some were close to the answer -- guesses of elephant tracks, water buffalo or horse footprints, groundhog holes, bird scrapings, bear footprints, misaligned aerification holes, fox damage, hail marks, repair plug removal, holes created by worms or insects, or perhaps rock removal from the field. The correct answer was that a cow or cows escaped into this field just after planting, pressing the tall fescue seed down and it remained there, growing in the footprints, until harvesting when those below-grade footprints appeared. Correct answer from Jason Haines below:

My advice is to keep large animals off of sod production fields, although the cows on this manilagrass (Zoysia matrella) sod farm in northern Vietnam, shown below, didn't cause any problems once the turf was established. 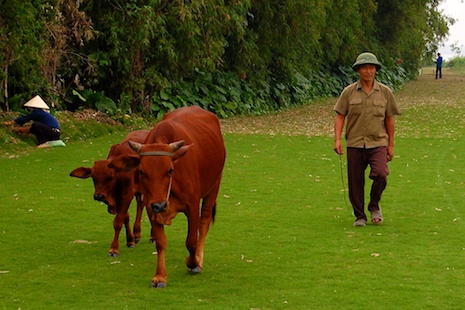