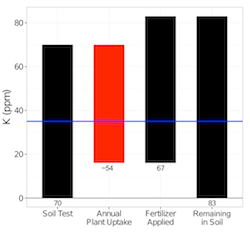 Waterfall chart of potassium (K) on a golf course putting green shows why K is often required as fertilizer; the grass uses enough K in one year to drop the soil level below the MLSN guideline
A waterfall chart can be used to represent nutrient availability and use in turfgrass. This has been explained in case studies of a desirable element that is often added as fertilizer, potassium, and in the case of a less desirable element in turfgrass soils, sodium.

Potassium is often required as fertilizer because the grass uses more potassium than is available. The situation for calcium is quite different. The amount of calcium available in the soil is almost always much more than the grass requires.

This waterfall chart for calcium takes a look at the calcium in the soil and shows the various additions and subtractions of calcium over the course of a year. 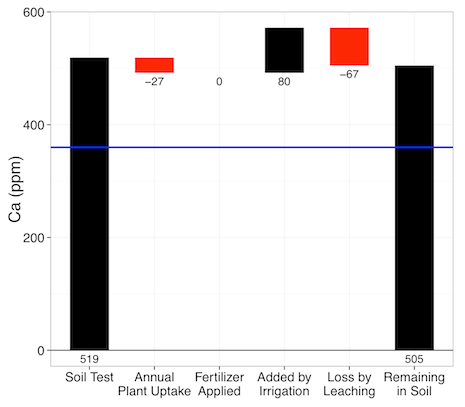 Here is an explanation of these data.

For more information about calcium for turfgrass, see:

How much calcium does turfgrass require?