Summertime syringing to cool bentgrass greens: I wouldn't do it today

@asianturfgrass many Japanese greenkeepers believe that syringing is effective to keep or lower leaf temperature. How do you think about it?

This question last month prompted an extensive discussion about the effectiveness of syringing greens. When I was a greenkeeper, I used to syringe* greens on hot summer afternoons. But more recently I've had a chance to study many experiments that have been done about syringing, and knowing what I know now, I wouldn't syringe today. Here's why. 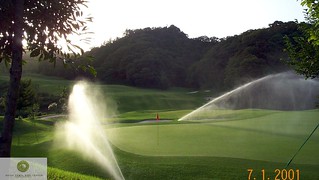 I'll highlight four experiments that have looked at this, and you will see there is one common theme.

Effects of Air Movement and Syringing on the Microclimate of Bentgrass Turf by Duff & Beard (1966): 6.4 mm (0.25 inch) of irrigation, an application of more water than we would consider syringing today, was applied to creeping bentgrass at noon. The canopy temperature in the afternoon seemed to be reduced somewhat (1 to 2°C) by this midday irrigation application. However, there does not appear to have been a control treatment to which water was not applied. This makes it difficult to be sure of the exact effect, but the addition of a substantial amount of water did decrease temperatures.

Syringing Effects on the Canopy Temperatures of Bentgrass Greens by J.M. DiPaola (1984): Eight rates of irrigation were applied, ranging from 0 (a control) up to 5.5 mm, at two different times, 11:00 and 13:00. The results of the experiment by Duff & Beard could not be duplicated. When 1.4 mm or more water was applied, there was sometimes a reduction in canopy temperature 30 minutes after the syringe, but that reduction never extended to an hour (even when applied water had a much lower temperature than canopy temperature). The reduction in temperature, which averaged 0.7°C, seems to have been greater when more water was applied. The conclusion? DiPaola wrote:

In summary, under the conditions of these studies, bentgrass canopy temperatures were not markedly affected by varying the volume or timing of syringing applications. Therefore, in the absence of wilt, the routine syringing of bentgrass greens must be reevaluated given the substantial economic cost of this procedure from the standpoint of water and labor alone.

Syringing: Does it really help? by Peacock and Bennett (1996): A syringe treatment (1 mm) and a hand-watering treatment (5 mm) were made at 13:00. Canopy temperature was initially reduced, but after 30 minutes was back to the same as the control plot to which no water had been applied. The turf quality was better in the syringed and in the hand-watered plot than in the control plot. They concluded that: 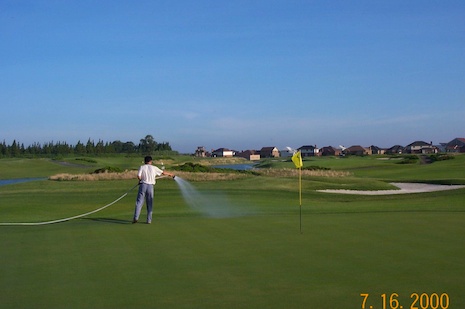 In another article about the same experiment, they elaborated, writing:

30 minutes after application, canopy temperatures were back to control plot levels. Therefore, hand-watering and syringing treatments do not provide an extended cooling of the turf canopy, but rather improve water status of creeping bentgrass, as indicated by higher leaf water potentials.

Fan and Syringe Application for Cooling Bentgrass Greens by Guertal et al. (2005): This study looked at soil temperature at the 1.3 cm depth. Syringing caused a small decrease in the maximum soil temperature, but also caused the mean time each day with soil temperature > 27°C to increase. Fans were more effective than syringing in cooling the soil, and fans combined with syringing were the most effective.

What's the common theme? Syringing doesn't seem to have any magical effect, although air movement, or fans, do! Ensuring that the grass is supplied with enough water will optimize turfgrass performance. 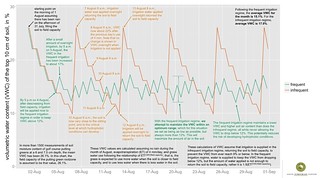 I wrote about this previously, suggesting that applying the right amount of water when the grass needs it is the most important thing to consider. Focusing on syringing, or deep and infrequent irrigation, or light and infrequent irrigation, all distract from the most important point. If the grass needs water, the best time to apply it is now. If the grass is going to need water this afternoon, then we can try to anticipate that by applying water in advance, to increase the soil moisture content.

What would I do if I were a greenkeeper today? I wouldn't even think about syringing. Rather, I would:

3. Focus on ensuring that the grass is supplied with the right amount of water.

* When using the word syringe, I mean the application of a small amount of water to the turfgrass leaves for the purpose of cooling the surface. This will necessarily be less than 0.2 mm of water (less than 200 mL/m2). When any more water than this is applied, I will no longer use the word syringe, but instead use the word irrigation, by which I mean (from Beard, 2005) the intentional application of water to the soil, usually for the purpose of supplying water to sustain green plant growth.