Turfgrass Mystery on the Putting Green 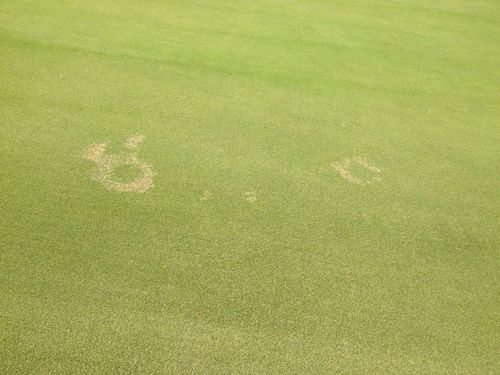 This is a good one. A friend sent me these photos and asked if I could identify what had caused the yellowing seen in the photo above, and in a closer view below. I couldn't solve it at first, but once it was explained to me, the symptoms made perfect sense. 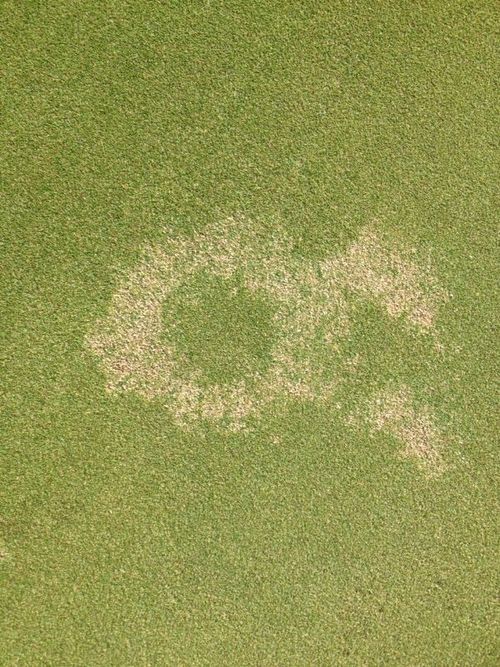 Here is a bit of contextual information that may help in solving the mystery. These symptoms appeared on a korai (Zoysia matrella) putting green maintained at a mowing height of about 3 mm in Japan in early August. Can you identify what has happened here?

This one proved difficult to solve, with answers coming in speculating that it was caused by: surfactant or herbicide spilling from a leaky bucket; scalping caused by too much fertilizer or sand or grain or aerification; crop circle caused by mythical rabbits; disease; fireworks; bug spray; and more.

The correct answer is that this korai green had a few small patches of Miniverde utlradwarf bermudagrass in it. The greenkeeping staff removed the Miniverde by plugs, replacing with korai, but somehow did not remove all the Miniverde. Because of the different growth habit between korai (very upright) and bermudagrass (more creeping and stoloniferous), when the greens were verticut, the korai remained green, while almost all the green leaf material of the Miniverde was cut off.

Dr. Brett Morris from Australia and Billy Aylmer from Ireland were the closest in identifying the cause of this mystery.

@asianturfgrass then they have put a plug of zoysia in centre of contamination to assist in coverage?

@asianturfgrass that's what I mean, the node part of the grass plant cut out and all it's tillers dying off

One of the implications of this differential response to verticutting is that korai greens grown in that climate may require substantially less frequent verticutting than ultradwarf bermudagrass. The Miniverde would not have looked like this had the greens been verticut more frequently.