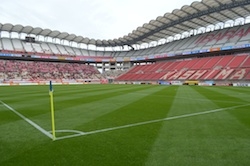 Of the 18 clubs in J.League Division 1 this year, just 3 play on cool-season (C3) grass pitches. One of these clubs is Kashima Antlers, and on two recent trips to Japan I had a chance to visit their home ground, Kashima Soccer Stadium, and see their training grounds in Kashima.

The J.League season runs from March to December. With the high temperatures across most of Japan in summer, it is difficult to keep C3 turf alive, let alone in acceptable condition for professional football, so most pitches are C4 hybrid bermudagrass (Cynodon dactylon x C. transvaalensis) overseeded in autumn with perennial ryegrass (Lolium perenne). Kashima Soccer Stadium is unique in having a field of kentucky bluegrass (Poa pratensis) and hybrid texas bluegrass (Poa arachnifera x P. pratensis) for improved heat tolerance. 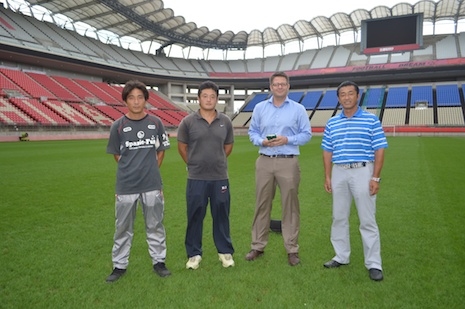 The stadium and training ground for Kashima Antlers are maintained by I-G-M, and they also maintain the Japan National Training Center in Osaka. When I visited Kashima in early September to meet with Mr. Suzuki and the team from I-G-M, I was impressed with the condition of the pitch. Even at the end of the hot summer, there was still an extensive root system. I also saw the impressive (and invisible until the sprinkler system was turned on) turf-capped sprinklers.

When I visited again on a game day in mid-October, the turf was even stronger, and was fully recovered from the heat stress of summer.

It is a great atmosphere in the stadium. The Antlers fans came into the stadium more than 4 hours before game time and were cheering loudly before the game had even started.

At the Kashima Antlers training ground, there are three pitches, each being hybrid bermudagrass overseeded with perennial ryegrass. We visited on 19 October, right in the middle of the overseeding process. One field had been overseeded, mown once, and was being painted in advance of use in two days. The second field was being overseeded and topdressed while we visited, and the third field was to be done the last week of October. 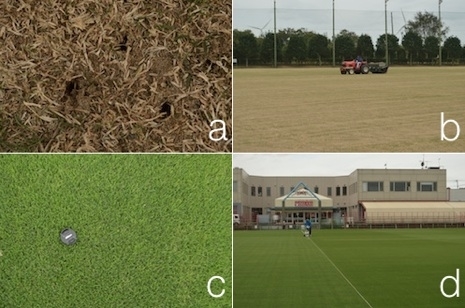 The overseeding process at Kashima; a) bermudagrass scalped and spiked, perennial ryegrass spread at 70 g/square meter; b) field topdressed with sand after seeding; c) the field after 1 mowing, about 2 weeks after seeding; d) painting the field 2 days before it will open to the team for practice

I calculated the growth potential for C3 and C4 grasses based on temperatures at Kashima from early August to the end of October this year. 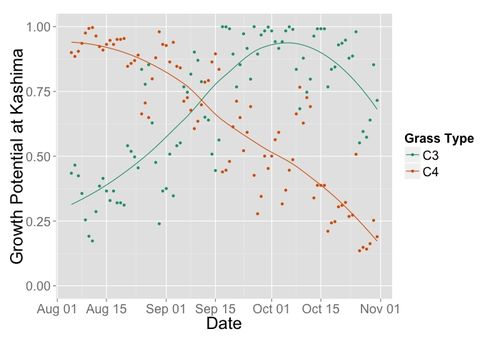 It is interesting to note, at the left side of the chart, just how poor the temperatures are during summer for C3 grass, and how good they are for C4 grass. Seeing those data makes me even more impressed that I-G-M are able to produce such a fine pitch at the stadium. One can understand why almost all the J.League teams play on C4 turf.