On the seductive attractions of metric units
Important questions and a good discussion: MLSN guidelines, K, and stress tolerance 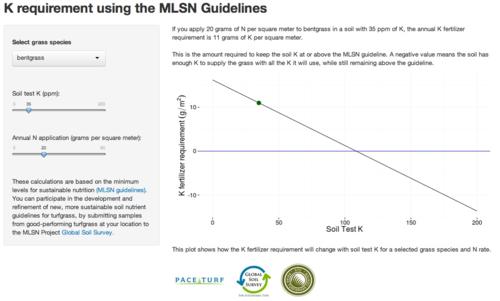 All the essential elements are important, and I don't rank any of them as more important than the others. But when it comes to risk of deficiency, potassium (K) is right at the top of the list. That is because K is used by turfgrass plants in quantities second only to nitrogen. In the case of seashore paspalum, K can be used in even greater amounts than nitrogen. A K deficiency is, in many cases, disastrous.

To prevent that, one can use the MLSN guidelines, which for K the guideline is 35 ppm, meaning one needs to keep the soil at or above 35 ppm. As long as the soil K is at or above that level, I am confident that K will be present in ample amounts for the production of high performing turfgrass surfaces. 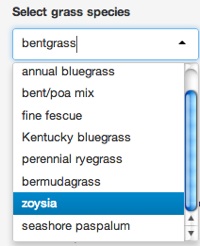 But to keep above 35 ppm, a number of factors are involved. One needs to know the grass species, the amount of N applied, which controls the growth rate and consequently the K uptake, and also the amount of K that is in the soil.

I have made this Shiny app that allows one to calculate the K requirement based on grass species, annual N rate, and soil test K.

First, choose the grass species. I've made some estimates of N:K ratios in the leaves of these species that allow us to estimate how much K the grass will use, based on the amount of nitrogen that is applied as fertilizer.

Most cool-season grasses have a N:K ratio in the leaves of about 2:1. The big differences are bermudagrass (3:2) and seashore paspalum (1:1) , which tend to have relatively lower amounts of N and higher proportions of K. 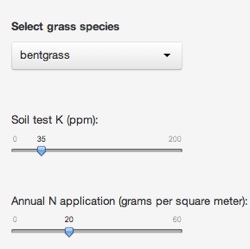 Then, use the slider for soil test K to select the amount of K in the soil, as determined by a recent soil test. Note that the MLSN guidelines were developed using data from the Mehlich 3 soil test extractant; if you use a different extractant, proceed with caution. You might estimate how this value would be on a Mehlich 3 test, or submit a set of 3 samples for the MLSN project Global Soil Survey, which will get you the required Mehlich 3 data.

Next, choose how much N you intend to apply in the next 12 months. I have put this in units of grams per square meter, because I find these units seductively attractive and easy to use. If you want this in other metric units, you'll know how to make the conversion; if you need this in pounds per 1000 ft2, divide the g/m2 units by 5. That is, 20 grams per square meter is equal to 4 pounds per 1000 ft2.

The Shiny app will update as you change the grass species, soil test K, and annual N application. You will see the calculated fertilizer requirement change. The text will change, and so will the plot. I've adjusted the plot below to show the output generated when the input is grass species of bentgrass, soil test K of 48 ppm, and annual N application rate of 16 g/m2. 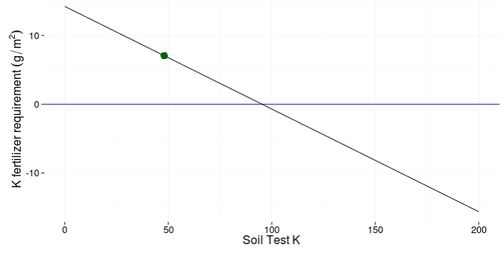 There is a horizontal line at 0, just to mark that level. The diagonal line is fixed for that particular species and that particular nitrogen rate, showing how the K requirement will change if that much nitrogen is applied and the soil test K changes in the range of 0 to 200 ppm. The actual point of 48 ppm soil test K corresponds to an annual K requirement of 7 g/m2, which can be read in the text on the app.

Try the mlsn_K app for yourself.

All the code used to make this app, and the calculations to determine the fertilizer requirements, are available on GitHub.