Grass species and the 2 green system 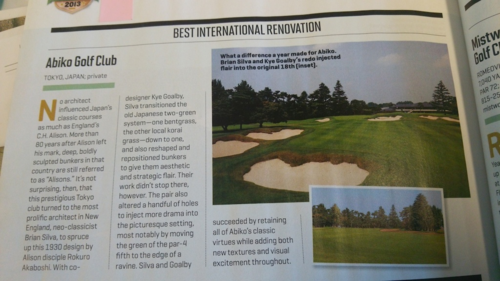 Abiko Golf Club near Tokyo won GOLF Magazine's Best International Renovation of 2013 award. In this article about the work, I read that Brian Silva, with co-designer Kye Goalby, "transitioned the old Japanese two-green system – one bentgrass, the other local korai grass – down to one."

The Club did have two greens before the renovation, but it was two bentgrass greens on each hole, not one bentgrass and one korai.

Rather than one bentgrass and one korai green, I've observed that most courses in Japan with the two green system actually have two bentgrass greens. To read more about this, see:

Although courses may have been constructed with one bentgrass and one korai green, most have converted the korai to bentgrass.

Just how common is the two green system in Japan? A survey by Monthly Golf Management magazine in 2013, with results published in The Greenkeeper 2014, provides an answer. Of the 1,176 courses responding to the survey (approximately half the courses in Japan), 37% have the two green system. It is interesting to see how this has changed over time. This table summarizes the survey results.