Too dilute to make a difference
3 fine football fields

In recent conversations (here and here), the topic of potassium (K) requirement for turf has come up, and there has been mention of the anthracnose research at Rutgers. There has also been concern about the "longterm impact" of using the MLSN guidelines.

What's the story here? One might summarize it in this exchange between John Kaminski and (I presume Larry Stowell of) PACE Turf.

Stowell: What is the concern? MLSN maintains soil nutrients at the level required for good turf performance.

Let me explain why I'm confident the MLSN guidelines ensure the turf will be supplied with enough nutrients in the short term and the long term, and try to relate this to the recommendations from Rutgers.

1. If you haven't, please read the article explaining the MLSN guidelines in GCM Magazine. The MLSN guideline for K is 35 ppm. This means the soil K should be kept at or above 35 ppm.

2. 35 ppm K in the soil is equivalent to just over 1 pound of K per 1000 ft2 (5 g of K per m2). That is the reserve amount of available K in the soil, even when the soil test level is low and approaching the MLSN guideline for K.

4. For concerns about long term impact, the data used to develop the guidelines include only samples from good-performing turfgrass sites. And these are sites of all ages. Indirectly, the MLSN guidelines have already been evaluated for long term impact. While there may be concern at a particular site with high soil K about what might happen in the long term if soil K were to decrease at that site, I'm confident that as long as soil K is maintained at or above 35 ppm, the grass will be supplied with enough. There are thousands of sites around the world with high-performing turf in soils with K at or above 35 ppm.

There is a clear effect of K in their research. They have collected a lot of data on soil and leaf K, and I am looking forward to more publications (and more data) about these experiments. But where there is a response to K applications, as shown in this chart from PACE Turf, is at soil levels at which we would be recommending K using the MLSN guidelines anyway. However, see below that the amount of K they apply to get an effect is much more than 100% of the grass use. 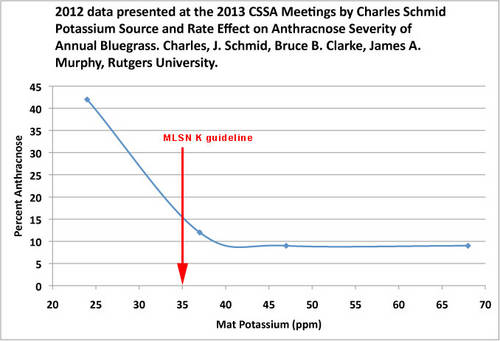 6. The experiment at Rutgers in which the effect of K was seen received summer N at less than 33% of the amount recommended to minimize anthracnose. That is, the experiment designed to establish sufficiency ranges for K was done on turf maintained artificially low in N, presumably to encourage anthracnose. One wonders what the K effect would be on turf supplied with the recommended nitrogen rates.

7. The amount of K supplied in the Rutgers experiments was much more than the grass could use or the soil could hold. The K recommendations based on this are for application of N and K in N:K molar ratios of 2:1 or 1:1. Based on plant use of K, those recommendations supply K at rates from 280% to 560% of plant use on a mass basis.

8. The MLSN guideline for K ensures 100% of the grass K requirement will be supplied, by fertilizer or from available soil K, all while keeping more than 1 pound of K per 1000 ft2 in reserve.