A number between 0 and 1: using the turfgrass growth potential 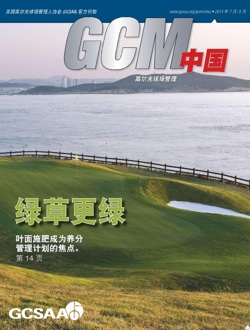 Every turf manager knows that temperature has a huge influence on the growth rate of the grass. Consequently, mowing, fertilizing, overseeding, winter dormancy, heat stress of cool season grasses, and much more are all directly influenced by temperature.

I find it especially convenient to make use of the turfgrass growth potential (GP), a number between 0 and 1 that represents the proximity of the actual temperature to the optimum temperature for growth. The turfgrass GP was developed by Wendy Gelernter and Larry Stowell at PACE Turf, and their 2005 GCM article about GP is on my list of 5 articles every greenkeeper should read.

The turfgrass GP was the topic of my (turfgrass talk) column in the July/August issue of GCM China. In the article, I explained what GP is:

Download Turf growth and temperatures in Chinese or English. 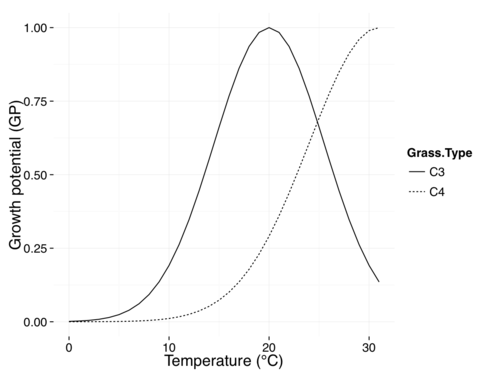 The growth potential (GP) of cool-season (C3) and warm-season (C4) grasses varies between 0 and 1 based on the optimum growth temperatures.

If you would like to read more about GP, see:

You can get the equation to calculate GP from temperature by downloading the climate appraisal forms above, or make the calculation yourself using the growth potential equation.

or, in an alternative formula to generate the same result,

GP is growth potential, a value from 0 to 1
e is the base of the natural logarithm, approximately 2.71828
t is the actual mean temperature
to is the optimum temperature, 20°C for C3 grass, 31°C for C4 grass
var is the variance which adjusts the shape of the curve, 5.5 for C3 species and 7 for C4 species when using °C.

If you want these equations already embedded in a spreadsheet, or want to use the Fahrenheit temperature scale, see the climate appraisal forms at the PACE Turf IPM planning tools.