Monthly Turfgrass Roundup: October 2014
"Think of the soil as a nutrient bank"

Cool-season grass in a tropical climate

Construction delays and an intensive events calendar have been cited as causes of pitch problems at Singapore’s National Stadium, “adding to the woes of a stadium that has drawn heavy flak for its sandy pitch.”

PARLIAMENT: Grass on National Stadium pitch did not have enough time to take root due to 3-month construction delay. pic.twitter.com/dI5LBRht3i

An editorial in the Straits Times said “Its patchy and sandy pitch thus represents an astonishing lapse that must be addressed swiftly if it is not to count as a national disgrace.”

This is an interesting technical problem, especially when one learns that the grasses being used in Singapore’s tropical climate are “rye and blue grass.” I presume that these are perennial ryegrass (Lolium perenne) and kentucky bluegrass (Poa pratensis). These species are used in locations where the average annual temperature is less than 16°C. In the two coolest months of the year in tropical Singapore – December and January – the average temperature is 26°C.

Where in Asia does one find these cool-season grasses? In Beijing, Seoul, or Sapporo – in places where it is cooler than Shanghai. Where it is warmer than Shanghai, warm-season grasses are used, and especially when the average annual temperature is more than 20°C, there is almost exclusive use of warm-season grasses. This chart plots a number of world cities by average annual temperature. A check of the turf species forming the base surface on sports fields in those locations will confirm that temperature cutoff point.

DaCosta and Huang describe what happens in their chapter on heat stress physiology and management from Turfgrass: Biology, Use, and Management:

Under prolonged heat stress the imbalance between carbon consumption and carbon production results in the depletion of carbohydrate reserves, which in turn limits the survival of turfgrass.

Rather than construction delays, it would seem that this negative carbon balance, an inevitable result when growing cool-season grasses in a tropical climate, would be an issue with grass performance on the pitch.

I’m not sure if the soil is cooled. I've not read about that in the Straits Times. Based on research with other cool-season grass species, and observations of kentucky bluegrass and ryegrass performance across a range of temperatures, those species would probably provide an acceptable turf in Singapore if the rootzone temperature could be maintained below 22°C. 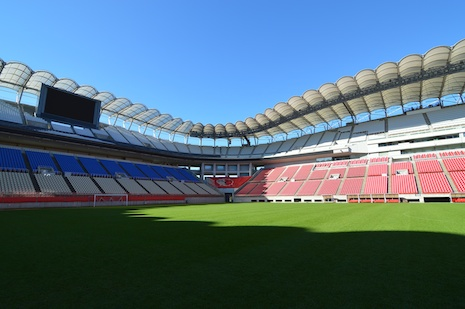 But the average annual temperature in Singapore is more than 26°C, and the rootzone temperature, if a refrigeration system is not being used, would be very similar to the air temperature. So why would rye and blue grass be used? I can guess that it has to do with the amount of light that reaches the pitch.

There is an extensive roof on the National Stadium. This will restrict the amount of photosynthetic light that reaches the grass. And cool-season grasses generally have a lower light requirement than do warm-season grasses.

The light available for photosynthesis is expressed as a daily light integral (DLI). It is the photons of photosynthetically active radiation striking a surface in one day, expressed in units of moles of photons per square meter per day. I’ve estimated that the average DLI in Singapore, accounting for cloud cover, but assuming there is no shade from trees or buildings or roofs, will be about 35 mol m-2 d-1.

I guess perennial ryegrass and kentucky bluegrass may receive enough light to perform well, assuming the rootzone is cool enough, at a minimum DLI of 20. If the roof at the National Stadium restricts 80% of the natural light from reaching the pitch, then the DLI on the pitch would be about 7. Supplemental lighting could be used to increase the amount of photosynthetically active radiation.  But if the natural light is restricted too much, supplemental lights won’t be able to add enough to the DLI. Supplemental lights, run for 24 consecutive hours, may increase the DLI by about 15 mol m-2 d-1. 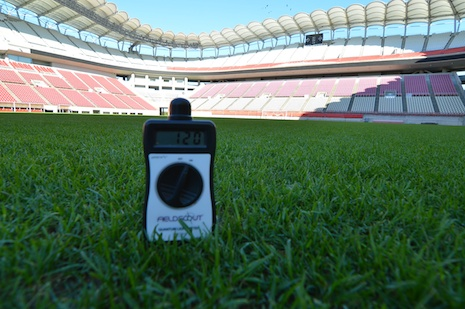 A quantum meter at Kashima Stadium measures the instantaneous photosynthetic photon flux density; adding together each instantaneous measurement for the course of a day gives the daily light integral (DLI).

One can see that the success of the grass on the pitch comes down to a math problem. First, is the temperature of the rootzone cool enough for the species being grown? Second, is the DLI high enough to support the necessary growth and recovery of the grass?

The nual noi variety of manilagrass (Zoysia matrella) is a warm-season grass that may also require a minimum DLI of 20 to produce an acceptable turf. That is, for a warm-season grass, nual noi is relatively tolerant of shade, and in fact has a similar DLI requirement to cool-season grasses.

And perhaps most importantly, for the situation of a venue with an intensive events calendar, it grows rapidly compared to other warm-season grasses. In experiments at Thailand, with grasses given the same fertilizers and grown at a DLI of about 30, nual noi had 52% and 25% greater clipping yield than bermdugrass and seashore paspalum, respectively.

Whether any grass can work in the environment of the National Stadium, and which species it should be, will come down to what temperature the rootzone can be maintained at, and how much light is provided to the pitch.