"Could you tell me?"
A course like no other

What do wetting agents really do?

There is a good article by Karcher and Richardson in GCM about the effect of wetting agents. In the article, they point out something important:

It is often stated that some wetting agents move water rapidly through the root zone while other products retain considerable moisture near the surface, but the data to substantiate such claims is limited.

I have been surprised, in conversations with turfgrass managers, to learn just how prevalent that thinking is, that soil surfactants can be divided into classes that retain more water in the soil, or that act as penetrants and may reduce soil water content.

If some wetting agents really do retain more water in the soil, and other types make water move through the soil more quickly, there should be some data to show that, right? This should be such easy data to get if there really were an effect. Because there doesn't seem to be such data, it would seem that wetting agents don't really produce those diverging results. 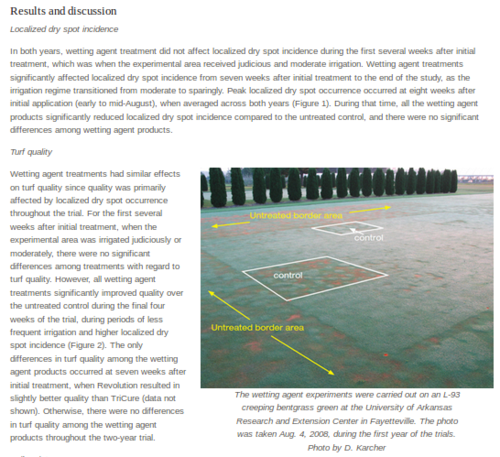 What wetting agents do, when the soil moisture content is measured after application, is this. They increase the uniformity of soil moisture. From Karcher and Richardson:

This is same result reported by Soldat et al. in this 2010 Soil Science paper: