Is there any more growth potential?
Monthly Turfgrass Roundup: December 2014

I wouldn't explain it this way again

This, the release of N from soil organic matter, is a question every turf manager will have considered at some point.

"Can we roughly predict OM N release using temps?" @insanseturf sent me that question, and followed it up by asking "How did you estimate OM N release in this handout (tables)?" 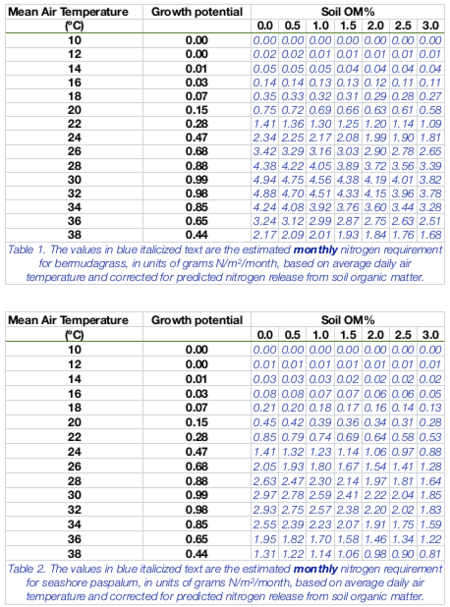 These tables attempt to estimate the combined effect of species, temperature, and soil organic matter on the amount of N actually required as fertilizer. I would not explain this the same way today.

First, the way that I estimated the daily release of N from soil organic matter in those tables was with this equation:

My assumptions were that in one year, 4 g N m-2 could be released from each 1% of soil organic matter. And then I divided by 120 because I expected that for a location, the maximum release would occur over a 120 day period when conditions were optimum for mineralization. And then I multiplied that times the GP, because the increase in GP from 0 to the optimum temperature seemed like a reasonable estimate of how much mineralization may occur. Then I took that estimate of the \(N_{om}\) and subtracted it from the expected N requirement based on GP alone.

So that's what I did then, but I wouldn't do it the same way now. Why? For a number of reasons.

1. Significant figures! This is just an estimate, and yet I shared that table with estimated nitrogen requirement to the hundredth of a gram per quare meter. That is silly. One might be able to apply 2.2 g N m-2, or calibrate one's application equipment to that rate, but 2.17 g N m-2? That is unachievable accuracy, and by publishing a table with such detail, there is an implication that the numbers mean something more than they do, when they are meant as estimates.

2. I first prepared such a table when I saw course maintenance workers in Hokkaido spending what seemed like just as much time blowing grass clippings, and using a sweeper to collect grass clippings, as they were mowing the grass. This was during mid-summer in Hokkaido, when the GP is close to 1, and it seemed that the combination of fertilizer N and mineralized N was causing the turf to grow way faster than desired. The turf was over-fertilized. I wanted to make this table to show how the soil organic matter could reduce the need for fertilizer N across a range of temperatures.

3. If I were doing the same thing now, I would share an equation that would estimate N release from organic matter. I don't know exactly what that equation would be, but it would be something very general. And I would explicitly separate the estimate of N release from the estimated N requirement by GP.

4. I would reiterate that these are just estimates.

Among other disclaimers in that handout from 2010, I wrote this:

Please note that this information is approximate, but it can be used as a baseline for the development of a management program, is particularly useful as a baseline to start from when developing a fertilization program, and can be adjusted with simple calculations to predict nitrogen requirements on a daily and weekly basis also. The growth potential equation does not include light intensity, which is the other driving factor of growth in Southeast Asia along with temperature. Correction factors can be introduced into the equation to account for light intensity.

From 2006 to 2010 or 2011, I tried to make adjustments to GP to account for organic matter and photosynthetic irradiance. In the end, I found GP, in its original form, to work just fine. In practice, I like to estimate the effect of temperature by GP. The amount of N released by organic matter will be automatically accounted for in what I am going to share next. And the effect of light I like to just account for by a percentage, saying that if light is x, then I may increase mowing height by y% and reduce N rate predicted by GP by z%.

How does N released by organic matter get accounted for in practice? Well, when I think of how the nitrogen rate is determined, I think there are three traditional factors that have been used. The turf manager chooses how much N to apply based on the color and growth rate of the grass, based on how she wants the grass to grow, and based on her experience. Now GP does not supersede those, but it is a fourth factor that can be considered when determining if N should be applied, and how much should be applied. Because the amount of N released from organic matter will be incorporated in the color, growth rate, and experience factors, I don't see that it needs to be forced into the GP.

For more reading about this topic, see:

As you will see, there are a lot of variables involved, and it is difficult to prediuct exactly.