Top 10 posts on the blog in 2014
Is there any more growth potential?

When is it too hot to grow bentgrass? A look at nighttime lows above x, y, and z

Last year I shared this chart and suggested that an average annual temperature can be a useful threshhold to look at.

@asianturfgrass I would say when night time lows exceed 65 degrees F. Really start to see a difference when they exceed 70 consistently.

I obtained daily temperature records from the past 5 years for these cities:

The scripts to download the data and generate these charts are shared in this GitHub repository. The code could easily be modified to obtain data from any airport location of interest.

After getting the data, I first counted how many days with nighttime lows above 65°F (18°C) occurred in each of the past 5 years. 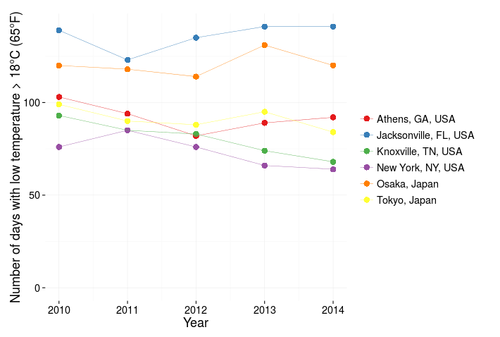 One could think of these counts of days with nighttime lows above a threshhold temperature as an index of summer length or an index of creeping bentgrass heat stress duration.

Scott mentioned that one really starts to see a difference in creeping bentgrass performance when the nighttime lows exceed 70°F (21°C) consistently. I plotted those counts for these same cities. 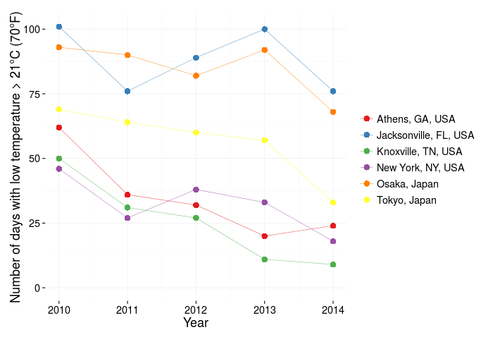 Jacksonville and Osaka look really challenging for bentgrass, with more than 75 days a year on average never dropping below 21°C.

It is remarkable to see the number of days with a low temperature remaining above 23°C (73°F), which is an indication of extreme conditions for creeping bentgrass. Osaka has more than 60 days (2 months!) on average each year with temperatures above this critical level. And Tokyo has more days above this level in the past 5 years than does Jacksonville. 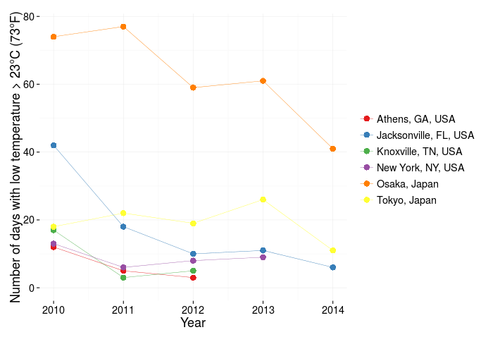 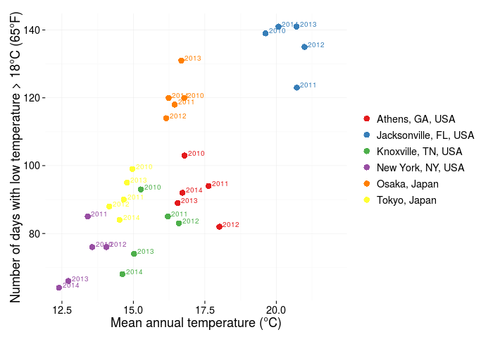 Yet even in those cities where bentgrass is used, there can be 80 to 120 days with nightime lows high enough to cause some challenges with the grass. 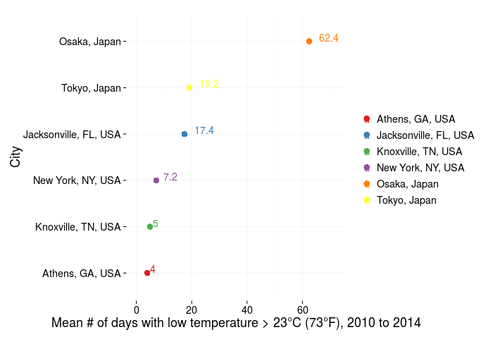