The daily light integral (DLI) is the total amount of photosynthetically active radiation (PAR) at a location in one day. The DLI in an open (full sun) area changes with the latitude, time of the year, and cloud cover. There will be further reductions in DLI if there is shade from trees, structures, or mounds/mountains.

Nitrogen supply, plant water status, the DLI, and temperature all influence turfgrass growth, or even the ability of a particular species of grass to provide the desired surface conditions at a given location. With professionally-managed turf, the nitrogen and the water are controlled by the manager, so it is the DLI and the temperature left as the major factors, outside of the manager's control, that will influence the turfgrass growth.

I showed the distribution of DLI and how it differs from place to place. The implication of that, for ultradwarf bermudagrass, is that the place with higher DLI will be more suitable for the grass, and the place with lower DLI will require more actions to improve turf performance in shade, such as increasing the mowing height and reducing the N rate.

I was curious about the combined effect of temperature and DLI, so I looked up data for a few more locations. I'll make a series of posts about this, in each one describing what I've done. The previous distribution of DLI looked at Tokyo, and then Tokyo and Watkinsville, Georgia (near Athens), on the days in 2014 when the mean daily temperature was greater than or equal to 20°C (68°F). I pick that temperature because I expect ultradwarf bermudagrass can grow relatively well above that temperature, and will grow quite slowly below that temperature.

This chart shows Fukuoka, Tokyo, and Watkinsville, which had a similar number of days above that temperature in 2014 -- 150, 150, and 151 respectively. 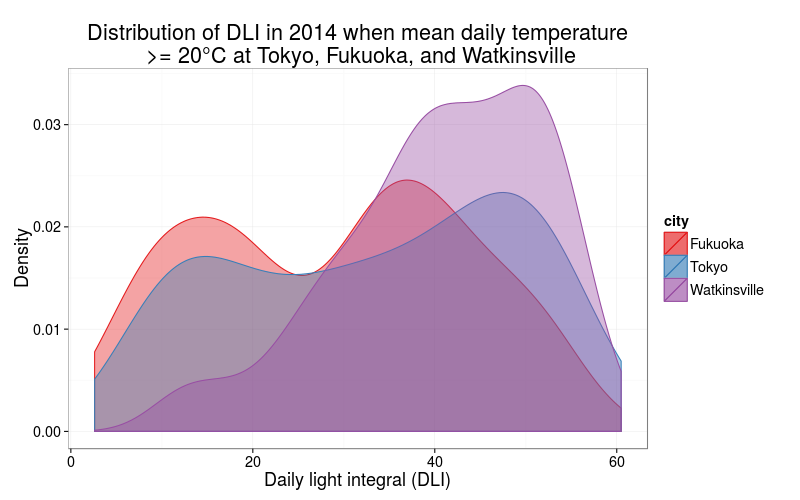 What about the total DLI over the year? Rather than my arbitrary cutoff at 20°C, one can also add the DLI through the year. This chart shows the cumulative daily sum of DLI at these same 3 locations. 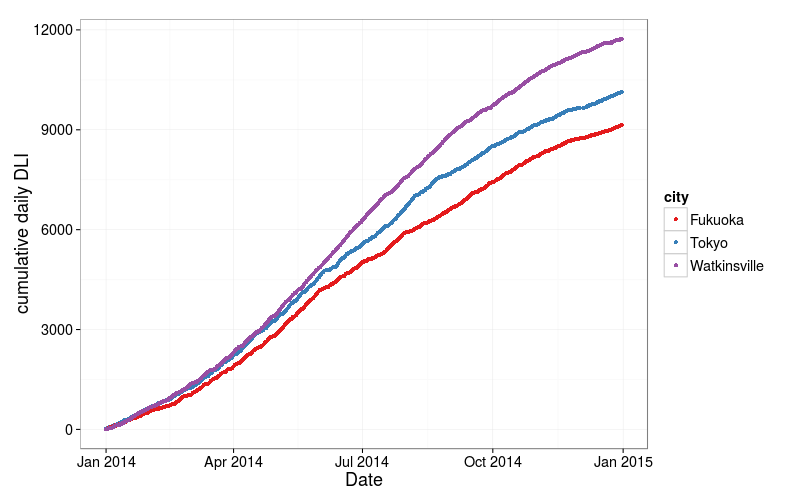 The cumulative sum of DLI was 9,139 at Fukuoka, 10,135 at Tokyo, and 11,736 at Watkinsville. Over the course of the year, there was more PAR at Watkinsville than at Tokyo, and more at Tokyo than at Fukuoka. This will have some impact on how ultradwarf bermudagrass would grow, and also on how the grass should be managed at each location. 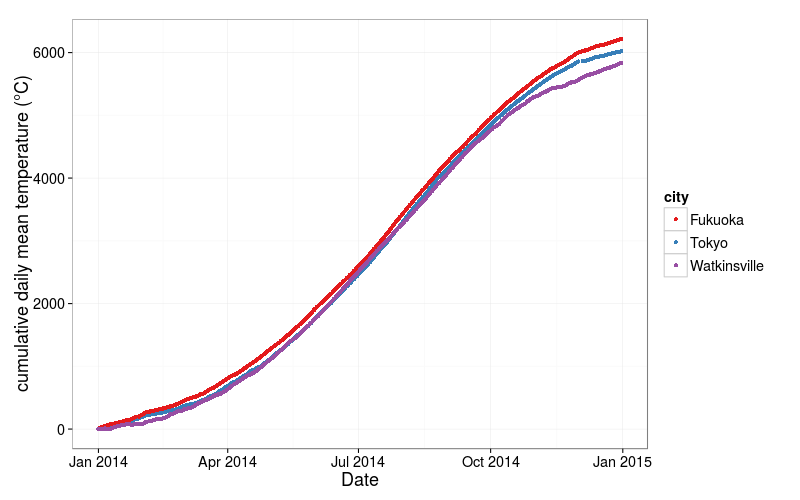 By adding together the temperature for each day, by the end of the year, Fukuoka has the highest total, then Tokyo, and then Watkinsville. The median annual temperature was 17.8 at Tokyo, 17.7 at Fukuoka, and 16.6 at Watkinsville.

With PAR, as represented by DLI, Watkinsville was highest, and Fukuoka was lowest. With temperature, as represented by the cumulative sum of daily mean temperatures, Fukuoka was highest, and Watkinsville was lowest. Can these be combined to get an index of growth, or an index of light and temperature affect on growth? I think so, and I will share some more calculations, and add in data for some other representative locations, in future posts on this topic.