Turf on Twitter
China and United States, temperature and sunshine

One of the best places to study tropical grasses in Southeast Asia is at the Suanluang Rama IX Public Park in Bangkok's Prawet District. 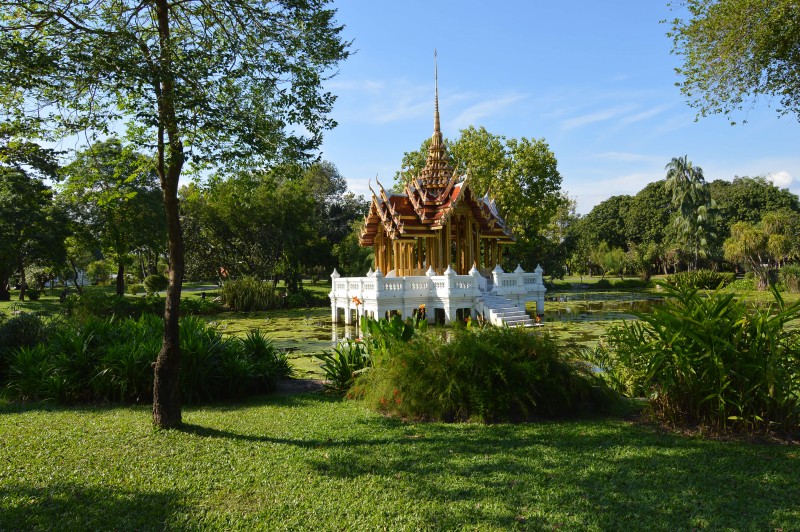 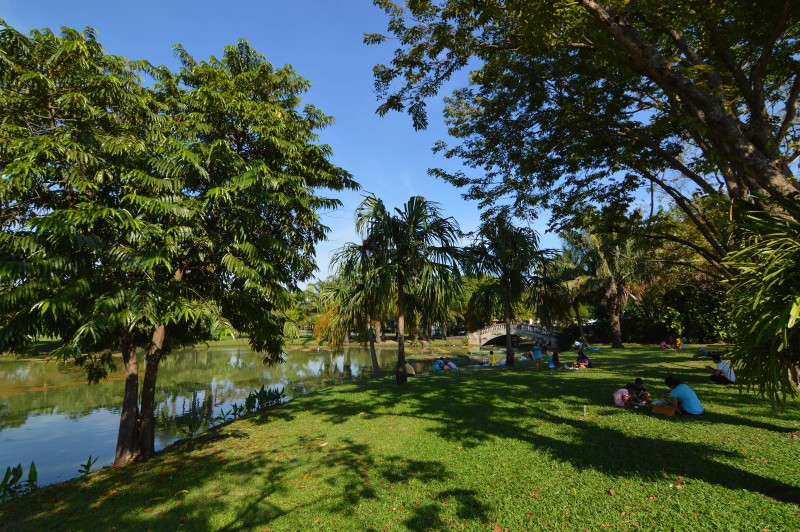 If you visit the park you will notice that the carpetgrass forms a monostand under the trees, and at the edge of landscaped areas, but moving outside the drip lines of trees into areas that get more sun, the sward transitions to one dominated by manilagrass. In the photo below, one can see, just after sunrise, the manilagrass in the center of the photo holds more dew than does the carpetgrass. 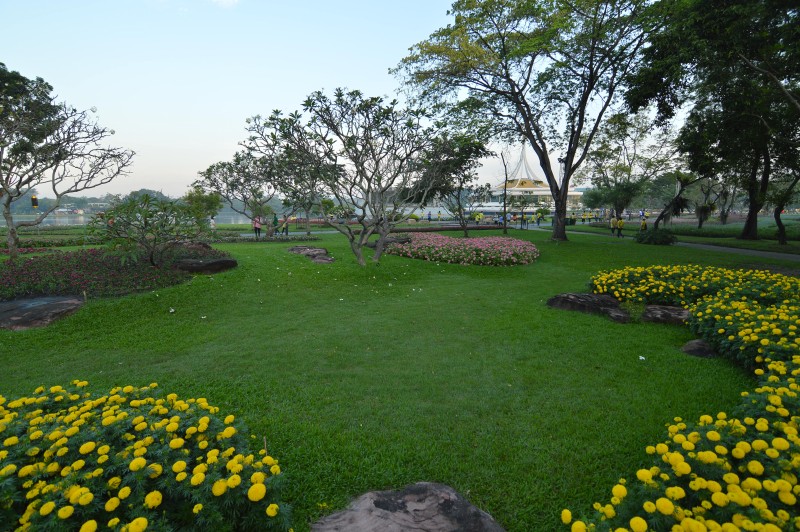 This year in April, a new medicinal plants garden was established in the northern part of the park. 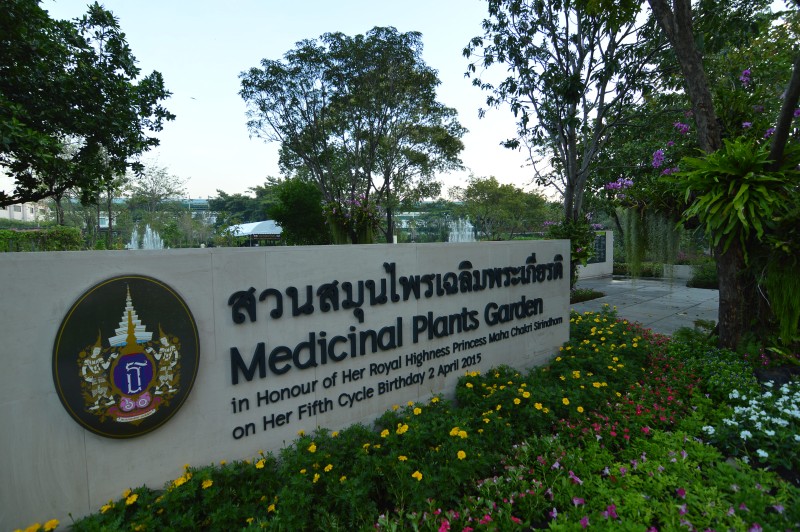 Medicinal plants are interesting, but what I found really exciting when I had a chance to explore this new garden is that there are much more than just medicinal plants there. In fact, there is an extensive grass collection, the largest I have seen in Southeast Asia. 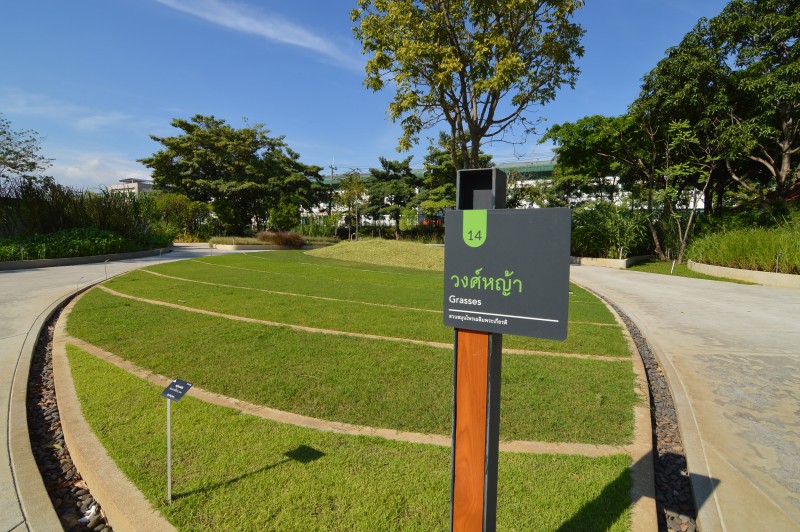 For mown turfgrasses in zone 14 of the medicinal plants garden, one can see: 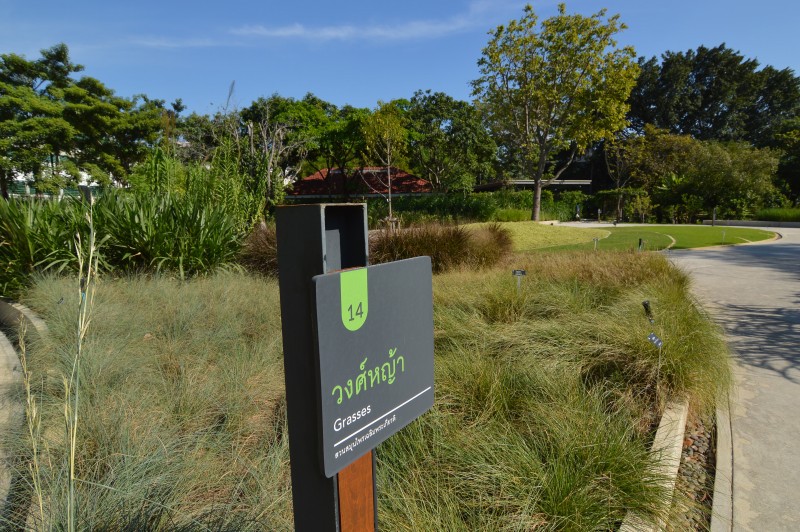 There are more ornamental and forage grasses and grains than turfgrasses -- rice, sudan grass, maize, sugar cane, and scores of others. 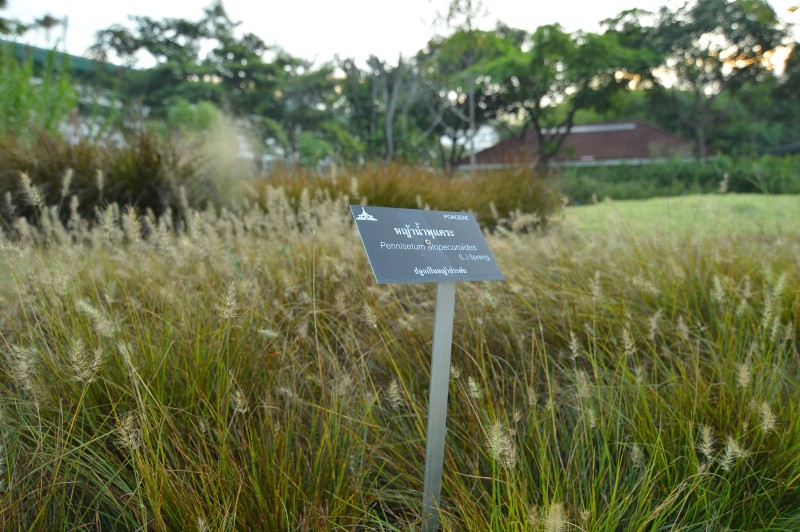 One can find common ornamental grasses such as Pennisetum setaceum 'Rubrum', along with a lot that I saw for the first time. 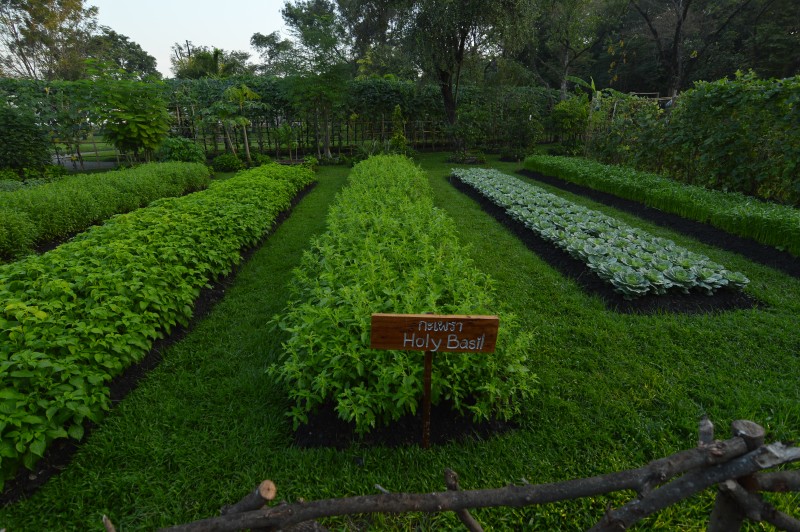 In the new medicinal plants garden one can also find herbs and vegetables, and in other sections of the park there are also vegetable and herb gardens for educational purposes.

A highlight of the year is the Suanluang Rama IX Flower Festival, held from December 1 to 10 each year. I've been to this festival a few times, and the 2015 version seems the best one yet. There are even grass elephants! 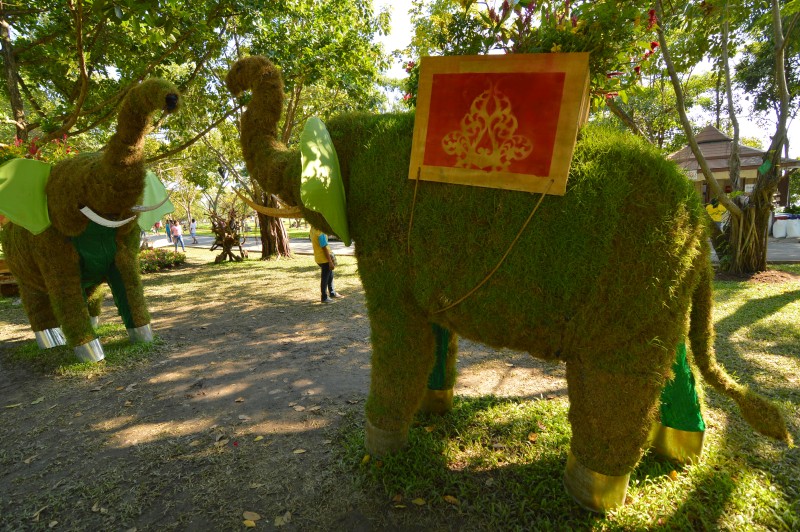 These displays of horticultural art during the flower festival are reminiscent of the Girona Temps de Flors. If you can't make it for the flower festival in early December, there are still plenty of other plant collections that remain open year round. The fern and orchid houses are in a deeply shaded section of the park. 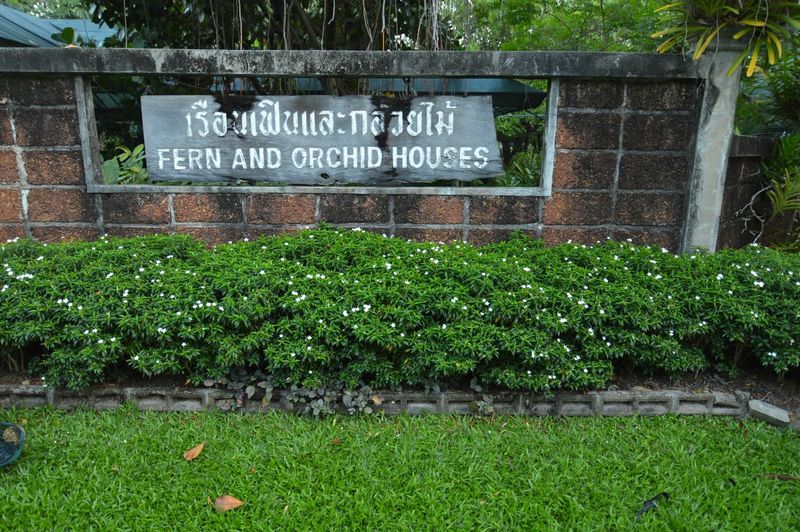 But back to the grass. As I mentioned, if you see the lawns at the park, they are primarily composed of tropical carpetgrass, as seen above in front of the fern and orchid houses, and below under the trees. 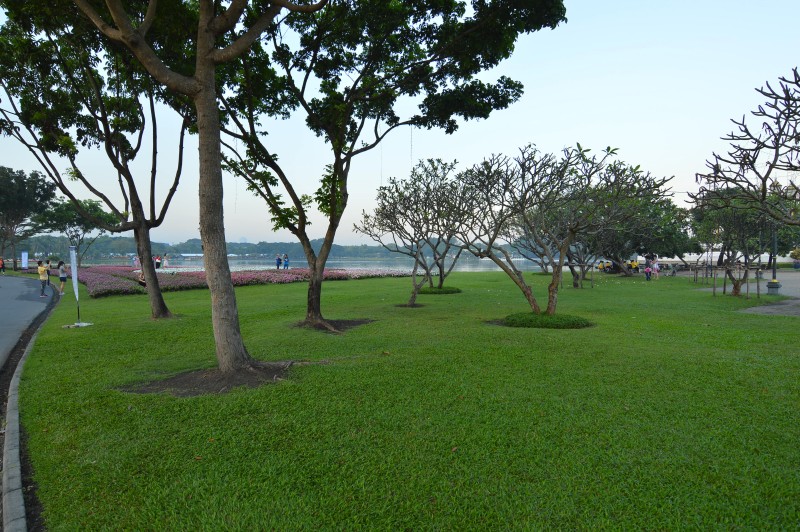 In some less shaded areas, the primary species is manilagrass. The species composition at Suanluang Rama IX park in Bangkok is the same as I've described for the lawns at the Marukatayawan Palace. One can also find Java grass (Polytrias indica) growing in patches around the park. It is usually, as shown below, found within patches of manilagrass. Polytrias indica has an inflorescence that is russet in color and this species forms a distinctive component of the sward because of this coloration. 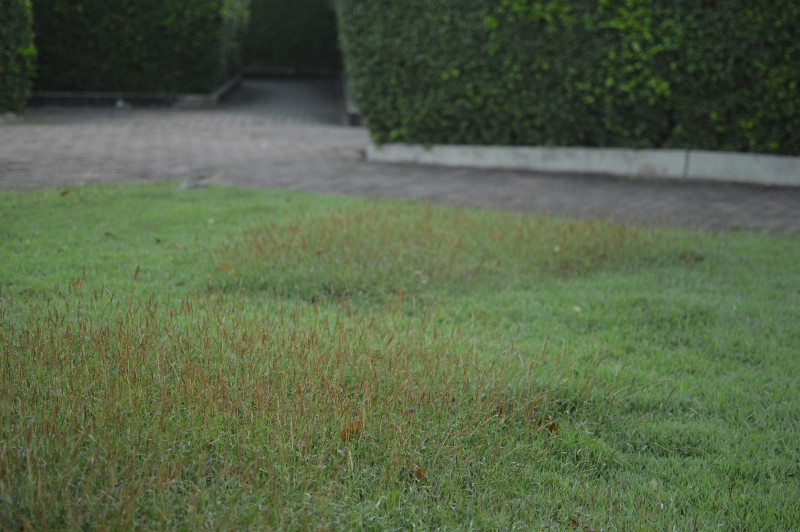 One can also find Chrysopogon aciculatus and Paspalum conjugatum mixed in with the Axonopus compressus in some places. The leaf characteristics of those three species are similar, and it is only obvious that all three species are present when the plants are flowering. These grasses on the lawns at Suanluang Rama IX park and in the grass collection of the new Medicinal Plants Garden are typical of the grasses that grow and are used in South and Southeast Asia. Well worth some study if you care about these things.

Even if you don't care much for botany or agrostology or grass elephants, I would still recommend a visit. This is the freshest air in the city and the park is popular for running, walking, cycling, boating, birding, tai chi, yoga, and aerobics. 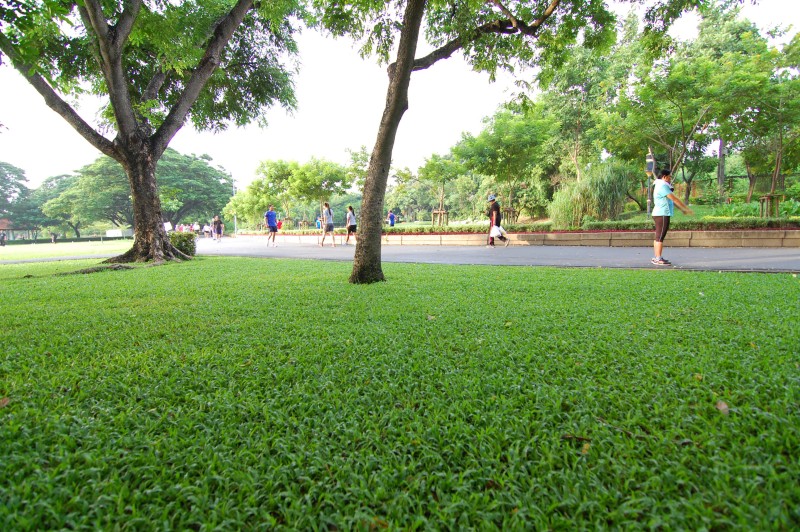