An evapotranspiration (ET) calculator using the Hargreaves equation
Update from Beijing – Day One of The R&A Seminar on Sustainable Golf Course Design, Renovation & Maintenance in Asia

This is not a very good article, and I don't recommend it

Unfortunately, I wrote the article. I wouldn't usually draw attention to articles that I don't think are very good, but in this case I feel obligated to, after receiving an inquiry about it:

"Hi Micah, Do you recomend this as still actual or is it need to be updated?"

Attached to the e-mail was a copy of The "Best" Soil Test, an article from 2005 that I'd almost forgotten about. 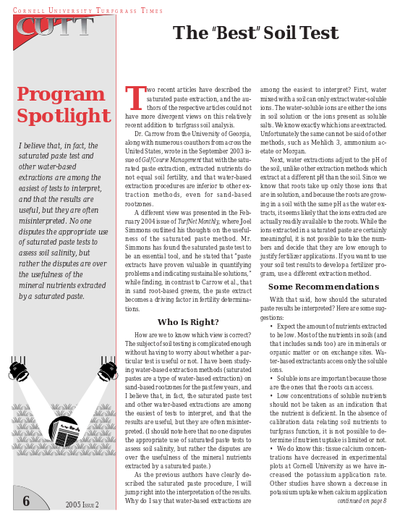 Actually, I'm not sure how it came to be published in CUTT with that title, because it was originally published in TurfNet Monthly in May 2004 with the title Q&A: Water-based extraction methods for turf soils.

"Probably it will just need a little update," I thought. But when I sat down to read it, I realized I think so differently now that I don't want to recommend it, nor do I think it worth updating. What I could do, however, is clarify just what it is I disagree with in the article, and which I do think is "still actual."

First, I recommend the original TurfNet Monthly version. Formatted as a Q&A, it doesn't seem so haphazard. And the Qs I posed to myself were in direct response to what I was writing as a follow-up to, which was the Carrow et al. article that I mostly agreed with, and the Simmons article that I largely disagreed with.

Second, let me go through my article -- the TurfNet May 204 version -- noting the points I'd like to emphasize or correct today.

"Given these contrasting opinions on the utility of water-based extractions, it seems that some additional information about these tests may be helpful."

Umm, apparently it seemed like it might be helpful when I was a graduate student, but now it just seems like extending an argument. Better just to say that water-based extractions (of which saturated paste tests are one) shouldn't be used to assess the nutrient requirements of turf. And be done with it. But I wasn't.

"the results are useful but are often misinterpreted."

"if you want to use soil test results to develop a fertilizer program, use a different extraction method."

Still agree. It would have been a better article if I just wrote that sentence.

"Soluble ions are important because those are the ones that the roots can access."

Sure. But this is only "important" in the sense that it is important for research purposes. I had a different perspective in 2004 when I was in the middle of a research project about the comparison of different soil tests. For the determination of turfgrass nutrient requirements, it is not necessary or even helpful to know the quantity of soluble ions.

"To diagnose a phosphorus deficiency, I would collect a few tissue samples"

"Use the saturated paste test to assess nutrient relationships in the soil."

No, no, no, again! This is only useful for research. I can't understand how this would be useful in day-to-day turf management.

"I find it much more useful to look at soil test data as an indicator of available nutrients but to use tissue analysis as a means to detect nutrient deficiencies ... Tissue tests tell us what the plant has, so there are no questions about whether a certain nutrient is available or not, deficient or not, or sufficiently mobile or not. In the tissue there are either adequate amounts or there are not. Final answer."

Could I disagree with anything more than this? That is just wrong. The way I think today, that would be a really inefficient way to determine nutrient requirements and would introduce all kinds of error into the process.

I wrote that before Larry Stowell and Wendy Gelernter and I ever had the idea of MLSN or the Global Soil Survey. In 2004, I was really disillusioned with soil tests, because I thought they were difficult to interpret. I was still thinking that there were these ranges -- low, medium, high, etc -- that nutrient levels fell into. And trying to reconcile turfgrass fertilizer research results to those supposed levels provided lots of inconclusive results.

I did additional experiments in 2005 with sands that I had collected from around the world, finally starting to come up with the idea of minimum levels and not worrying about an element when it was above the minimum. But then, from 2006 onwards, I was interpreting soil tests making sure that P was at least 35 ppm, K above 50, and Mg above 75 ppm. And there were still all these great turf surfaces that were coming in with nutrient levels even lower than that. Then when Larry came up with the idea for the way we could analyze large datasets of soil test results, which we used to identify the MLSN guidelines, and then we followed that up with the Global Soil Survey as a way to check the guidelines even more broadly, those minimum levels came down. So now, if one interprets soil tests using the MLSN approach, all those problems that I was struggling with as a grad student in 2004, and my objections to soil tests then -- those problems go away. Because soil tests are easy to interpret, and the research makes sense, if one just makes sure that soil nutrient levels remain above the MLSN guideline.

As for tissue tests, I have the same problem with them now as I did with soil tests in 2004. I don't agree that what are considered adequate amounts are accurate enough for tissue tests to ever be used as a decision making tool. I've been studying this. And I spend lots of money on tissue tests. But I'm doing this for research purposes, and reiterate that I would not use leaf nutrient analyses for determining if an element should be applied as fertilizer.

"If one wishes to get the best commercially available approximation of soil solution, run a saturated paste test on your soil samples."

Haha. Can you tell I was a student when I wrote that? It seemed so interesting at the time to have information that could not be used for decision-making purposes. I don't see today how any turf manager would wish to get an approximation of soil solution. Again, this is something that is fascinating for research, but of no use in turf management.

"I am optimistic that it will soon be possible to interpret turfgrass soil tests with more clarity."

Eight years later, working with Larry Stowell and Wendy Gelernter from PACE Turf, we came up with MLSN. That solved the objections I was having to soil testing in 2004. And it makes what I wrote back then somewhat irrelevant.