Both of these are worth your time

One is an article, another is a podcast, and you won't regret the time spent reading the first and listening to the second.

This article explains that "there are many agronomic programs that influence the playability and health of putting greens, but organic matter management is arguably the most important." It goes on to explain the standard practices in 2016.

Moeller and Lowe conclude that "traditional programs", and by that they mean programs that include core aeration, "still provide the most consistent results for managing organic matter and improving putting green conditions."

This is a really good article for referencing what is standard in 2016, but I'm not in full agreement with their conclusion. I used to think that coring was essential, but over the past few years I've changed my thinking. More about that in the footnote.

The second item is the recent TurfNet Radio podcast with Frank Rossi and Chris Tritabaugh about managing for the Ryder Cup. If you listen to this, you will find that they discuss organic matter on putting greens (and a lot of other interesting things), but if you haven't heard, there has been no core aeration on the greens at Hazeltine since 2013.

Point of reference; these greens have been cored once since I've been here. August of 2013, never since. https://t.co/qfFccR2qV0

The article says coring provides the most consistent results, and the podcast explains how greens are managed to a high standard without coring. It's good to be informed about this topic, so that you can be sure to make the right choices for any turf that you manage.

Footnote: I used to recommend the removal of 20% of the putting green surface area by coring each year and the annual addition of at least 12 mm of sand topdressing. I don't make that recommendation anymore.

Rossi and Tritabaugh talked about the grass yield and growth rate. How much was the grass growing? The idea being that one can match the quantity of sand applied to the rate of grass growth, thus avoiding coring by maintaining a consistent organic matter content at the soil surface. But they did not put a number to the growth rate. I think it is possible to put a number to the growth, and from that to make a site specific plan for organic matter management.

Consider the "new" bentgrasses with high shoot density, or ultradwarf bermudagrasses, widely considered to be prolific thatch producers. Please consider now how much thatch bentgrass will produce in Bangkok, or how much organic matter Miniverde will produce in Moscow. None, right? Now please continue that thought experiment a step further, and consider how much thatch (or organic matter) grasses produce when they grow slowly, supplied with just enough nitrogen and just enough water to produce the desired growth rate. Supply no N and no H2O to ultradwarf bermudagrass and there won't be any organic matter to manage. Is it possible that there is a level of growth at which minimal topdressing and no coring produce the desired surface? That's the goal, and I think it is possible with careful attention to the growth rate.

And that avoids (or at least minimizes) the putting surface disruption associated with coring too.

For more about this, see: 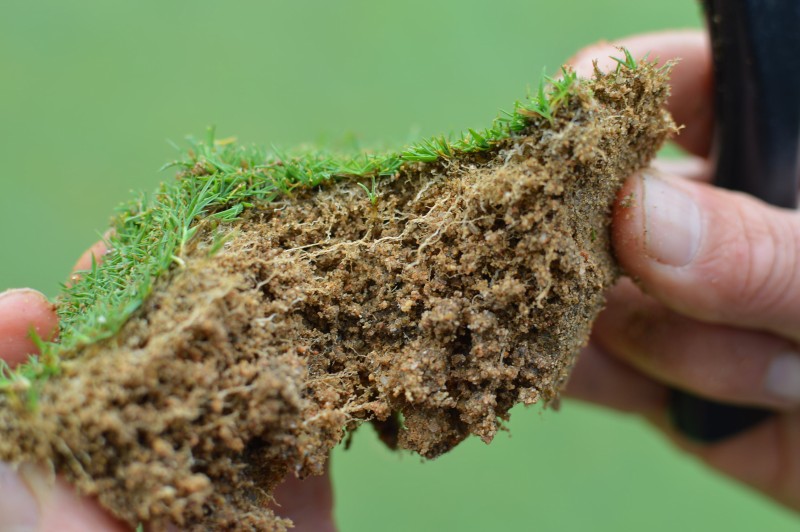