I've shown how calculation of the daily soil water balance, matched to precipitation data, can be used to estimate the irrigation water requirement for a given set of irrigation "rules." That is, if I calculate how much water is in the soil (details about the calculation method here), carefully adding in the amount added by rainfall, and subtracting the amounts lost to drainage or evapotranspiration, I can determine when and how much irrigation is required.

The first set of calculations I showed were for a location in Bangkok. Now let's go south, to the island of Phuket, and look at the irrigation water requirement using weather data from recent years. I got the data from the Phuket International Airport (HKT), which is just north of Blue Canyon Country Club. I'll imagine that these calculations are for a hypothetical stand of turfgrass at that location.

This is a view over the Canyon course looking north, with the control tower for HKT visible in the top left corner. 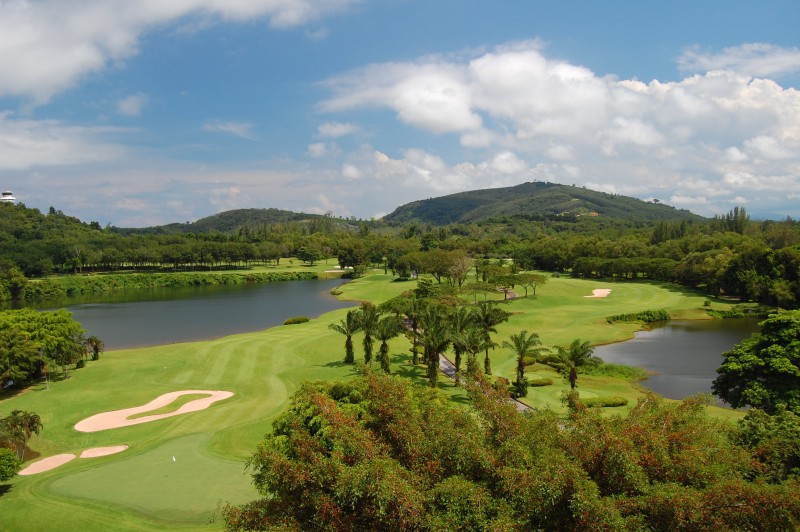 Now I will calculate the irrigation requirement using the weather data from HKT in 2015. First, I'll start with a scenario of:

Calculating the water balance for every day of the year with those conditions, the annual irrigation water requirement is 644 mm. 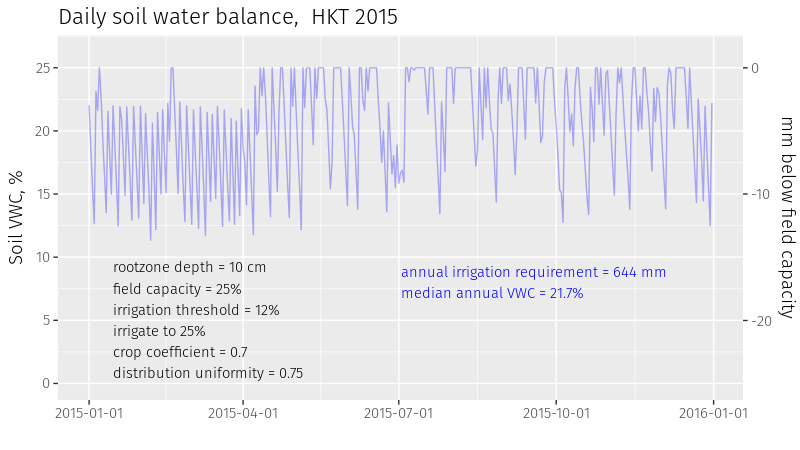 That would be a classic deep and infrequent irrigation regime. For that same location and same weather data, what happens if I change to a light and frequent approach? Now I'll irrigate at 15%, rather than at 12%, but I will add only enough water at each irrigation to reach 20% VWC in the top 10 cm, rather than 25%. In this case, the annual irrigation requirement drops to 620 mm. 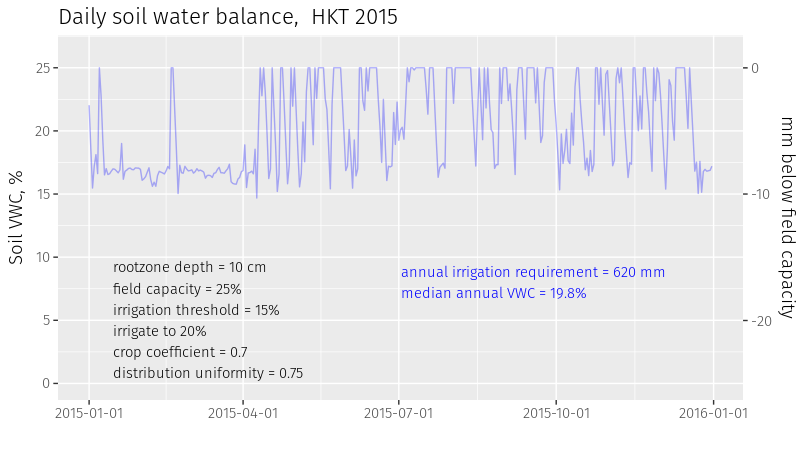 What might happen if I start using a (or use an improved) soil surfactant? I could reasonably expect that the spatial variability in soil water content would be reduced, and that the soil would be easier to rewet after drying. I can go back to the original deep and infrequent rules, but now with the surfactant use I will let the irrigation threshold drop down to 10%, instead of the more conservative 12%. With the surfactant, I think that is a reasonable and safe adjustment. Now what happens? The irrigation water requirement drops from 644 mm to 605 mm. 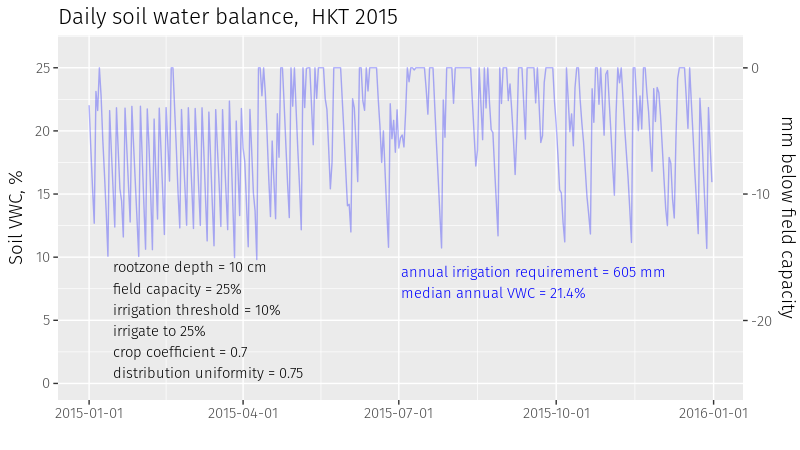 What happens if I can get the roots to grow a little deeper? If I then increase the rootzone depth from 10 cm to 12 cm, the irrigation water requirement goes from 620 mm down to 569 mm. 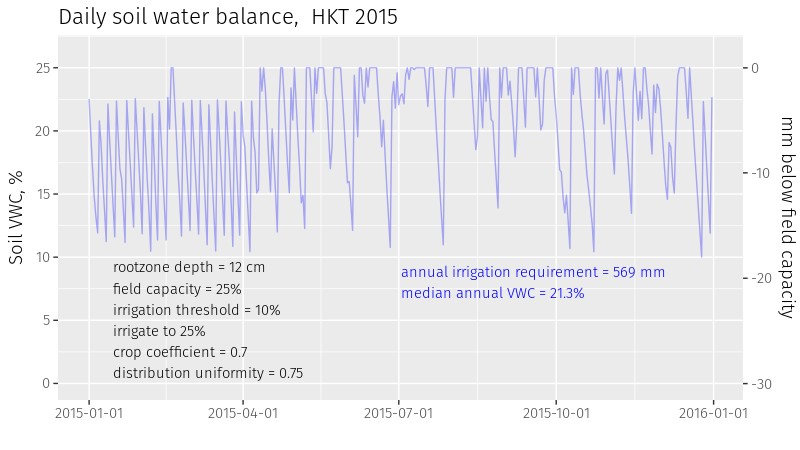 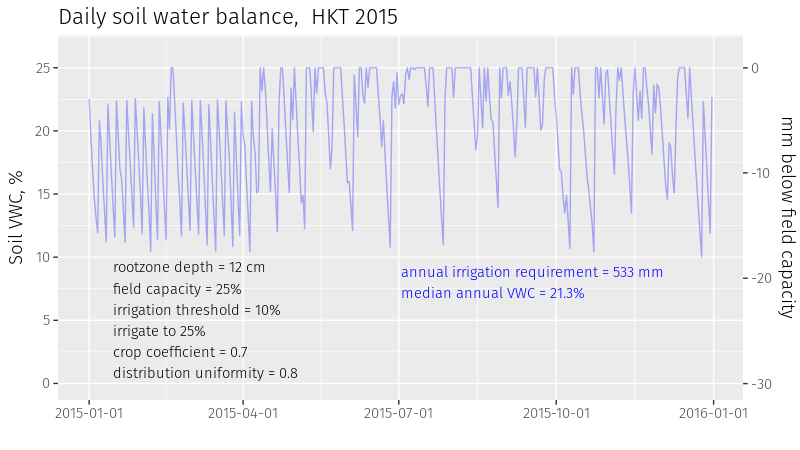 And if I then go back to frequent irrigation rules, in this case irrigating at 15% and adding water to increase the top 12 cm to 20%, the irrigation water requirement is 529 mm. 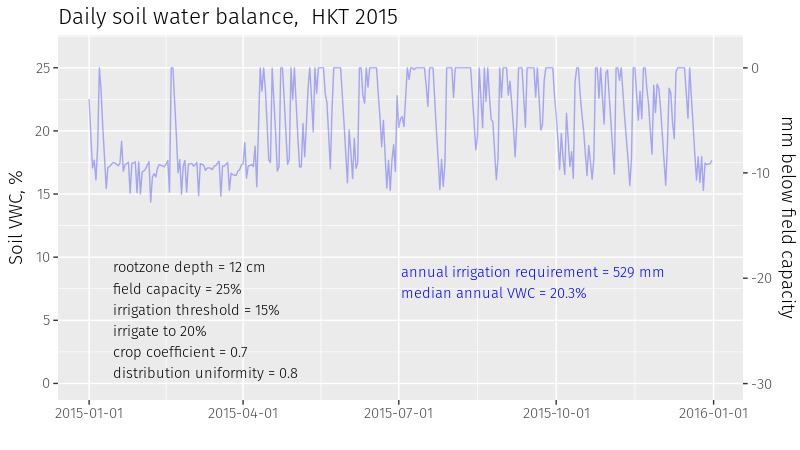