For my calculations, I was looking at the past 10 years, from 2007 to 2016. I wanted to show the variation in irrigation water requirement at both locations, based on a calculation of the daily soil water balance. 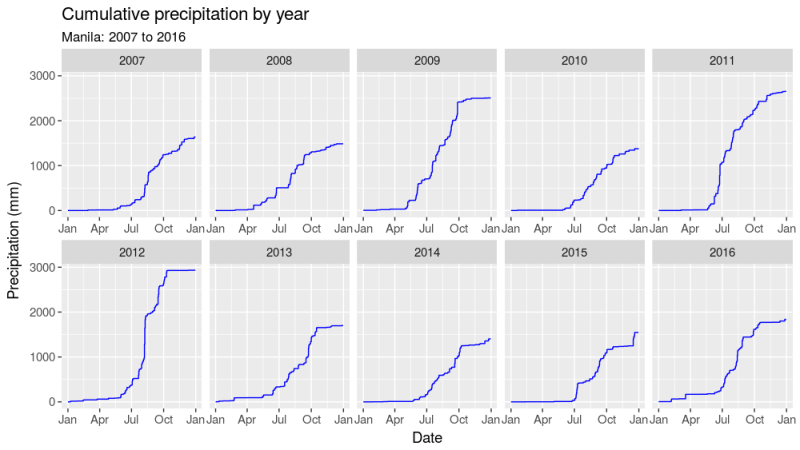 I was able to get the daily precipitation from the GHCN (Global Historical Climatology Network) daily summaries by using the rnoaa package in R. For Manila, the annual precipiation (summed from the daily amounts) for the past 10 years ranged from 1381 mm to 2932 mm, with a mean annual amount of 1908 mm. That's pretty close to the normal of 1877 mm. For Cebu, there wasn't as much rain. The lowest year of the past 10 had 682 mm, the most was 1713 mm, and the mean was 1276 mm. Also pretty close to the normal of 1260 mm. 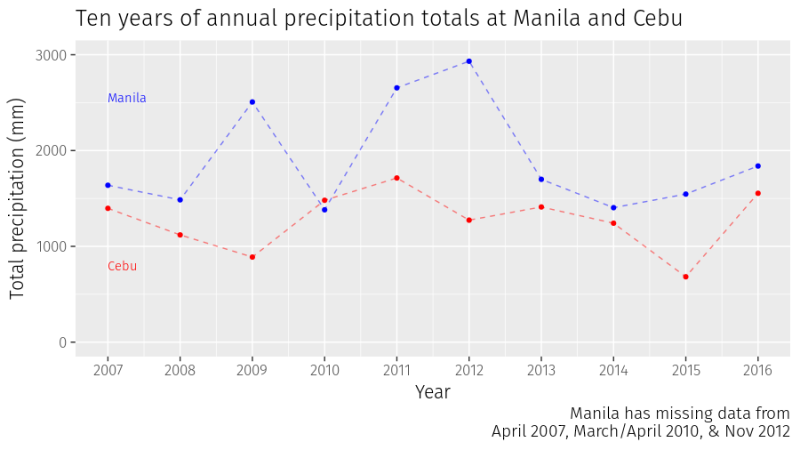 So what surprised me? Cebu gets less precipitation than Manila. The year with the most precipitation (in the last 10 years) at Cebu still had less rain than an average year at Manila. With those kind of differences, I expected the irrigation water requirement to be more at Cebu than at Manila. It rains less at Cebu, so more irrigation should be required, right?

The calculations don't work out that way. The reason is the way the rain is distributed through the year. Manila has more pronounced dry seasons and wet seasons. Cebu has dry and wet seasons too, but the dry seasons have more rain than at Manila.

For more, see the full presentation.