No matter how much sodium one puts into a sand rootzone, the soil structure cannot be affected, so gypsum won't be required
"Sorry if this is a rubbish question"

After Paul Robertson asked if anyone is using a Pelzmeter, a long discussion followed, and the notifications on my Twitter account blew up. I think the conversation is still happening.

My only contribution to that conversation was to share a link to an article by Richards et al. that shows the Pelzmeter and the Stimpmeter give the same results with "no differences in measurement repeatability."

The conversation kept going, eventually touching on the quantity of clippings mown from the turf, which is some indication of how much the grass is growing, and the green speed. I was reminded of a question from a correspondent a few months ago. He wrote with this question:

"Have you correlated yield to speed? I have to assume that as yield changes speed changes also."

I attach a chart with clipping volume in L/100 m2 (same as quarts per 1000 ft2) on the x axis and green speed on the y axis. That's from a couple years of tournament week measurements in Japan. Speed is affected by other things but the clipping volume is sure to have some effect and I don't think it will ever be in the direction of more growth = faster speeds.

This is the chart I attached. 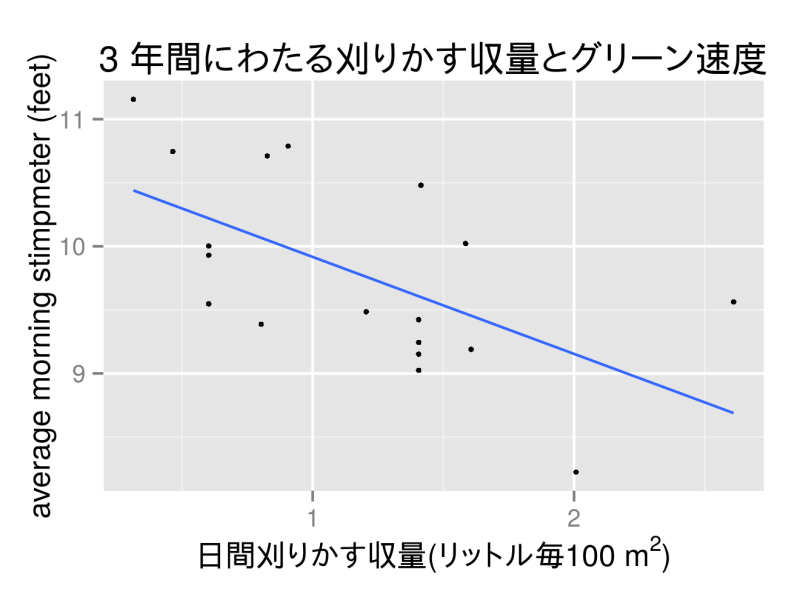 Today I looked up the data from 2016 and added it to the chart, and this includes a couple measurements from July 2016 a month before the tournament week. 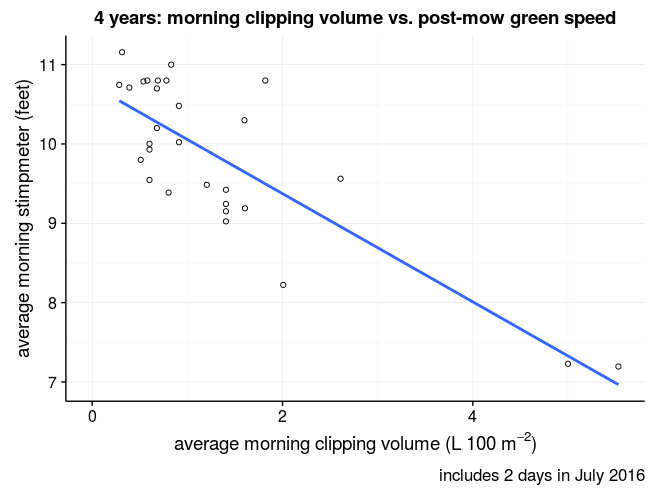 Here it is without the July measurements.

And here are the data broken down by year. 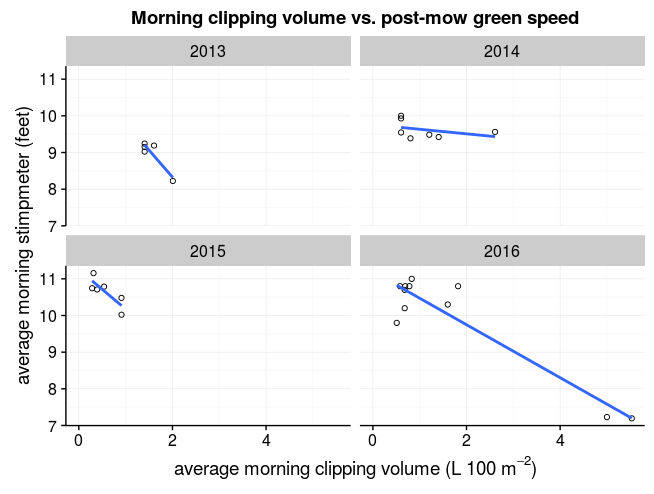 Bill Kreuser showed data on bentgrass where the quantity of clippings was not related to the previous day's stimpmeter measurement. Those data are surely correct. But if one thinks about the big picture view, of the range of growth rates one can have over the course of the year, and the range of green speeds, I think it makes sense to think of green speed as being affected by how much the grass is growing.

And this leads me to something else that I can't help but mention. Bill can show data that demonstrate an interesting point; clipping yield was unrelated to green speed under the conditions of his experiment. I can show data that demonstrate an interesting point; clipping volume in the situation I describe is obviously associated with green speed. These experiments are not that hard to do; one could generate some kind of data about green speed and could make it show whatever one wanted to, if one planned it right, because there are a lot of factors that influence green speed! So why is it so difficult to find data about Si and green speed? I still think it is ridiculous that a stiffer leaf would make for a faster green speed.