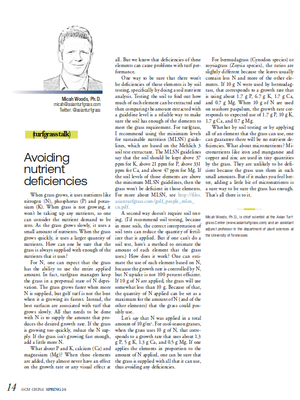 That's the title of my column in the May-June issue of GCM China. I described two ways to ensure there are no nutrient deficiencies.

One way is to find the quantity of elements in the soil by soil testing. Then one can supply enough of each element to ensure the quantity in the soil remains sufficient to supply all that the grass can use.

A second way, if soil tests are not conducted, is to make a conservative estimate of how much of each element the grass will use, and then to supply that amount as fertilizer. I prefer the first approach that utilizes soil testing, because in almost all cases the first approach will result in more efficient use of fertilizer.

The article is available in Chinese and in English.

For more about the first technique that utilizes soil testing, and the MLSN guidelines I recommended, see Just what the grass requires (this is the Chinese version of the same article).

All 14 articles I wrote for this GCM China  (turfgrass talk)  series are available in book form in A Short Grammar of Greenkeeping.

Video report from The R&A sustainability seminar in Beijing

This report gives a summary of last week's R&A Seminar on Sustainable Golf Course Design, Renovation and Maintenance in Asia, held at the National Convention Center in Beijing in conjunction with the China Golf Show.

At the seminar, "more than 200 golf course superintendents, developers, managers and academics from throughout China learned from a number of speakers that sustainability is more than a concept or an idea. It applies directly to their golf courses and facilities and can have a tangible and measurable impact on the success of their operations."

Report from the China Golf Show

It's always a fun time at the China Golf Show in Beijing. There are the seminars, the old friends, the technology, and the Peking Duck. This year also featured The R&A Seminar on Sustainable Golf Course Design, Renovation, and Maintenance in Asia in conjunction with the Show. Here are a few highlights:

I saw a few people that I used to work with at Shanghai Links, including David Young with Nelson & Haworth. We reminisced about our work together 18 years ago. "Was it really that long ago!?" 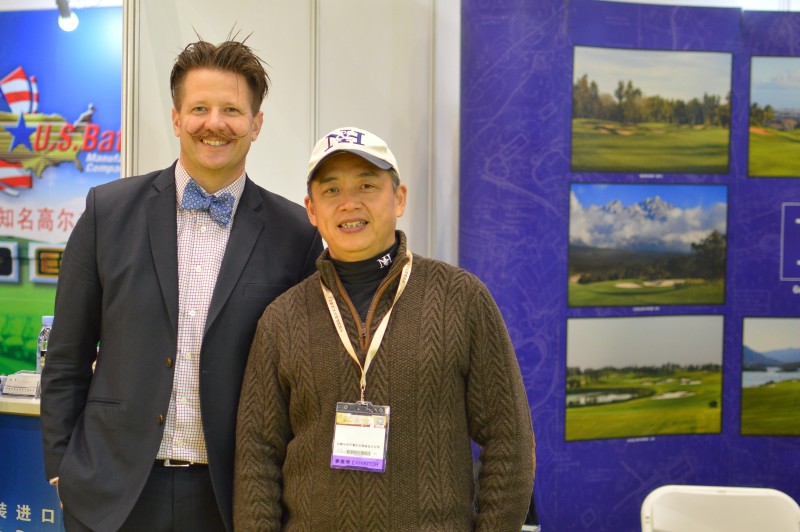 The helicopter and drone sprayers are really interesting for spot applications and for treatment of extreme terrain. Integrated pest management and spot treatments taken to a whole new level. Cool stuff. 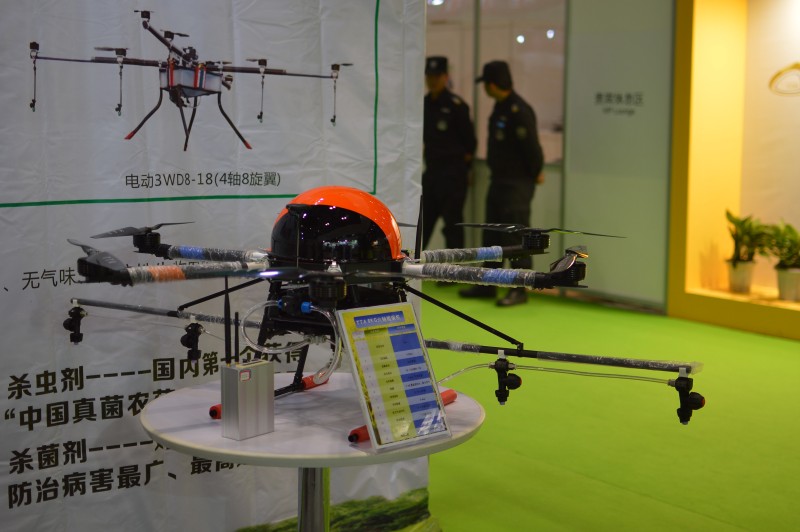 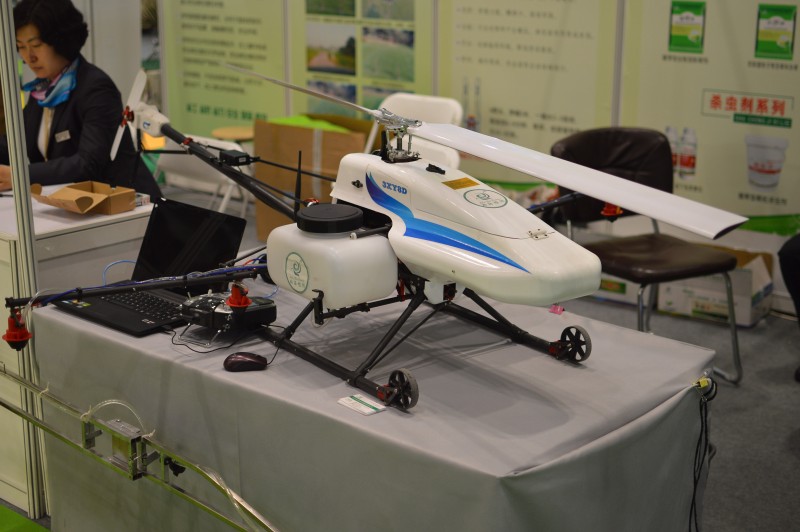 In my seminars (handout here) I talked about things that can help to produce better playing conditions with fewer inputs. It's not surprise that I'm not a huge fan of sandcapping. I shared some data to show why. Sandcapped surfaces tend to get soft -- really soft, like ballmark in fairway soft and mud on ball soft -- unless extensive work is done to control organic matter.

All my presentation slides from The R&A Seminar on Sustainable Golf Course Design, Renovation, and Maintenance in Asia are available on my Speaker Deck page. 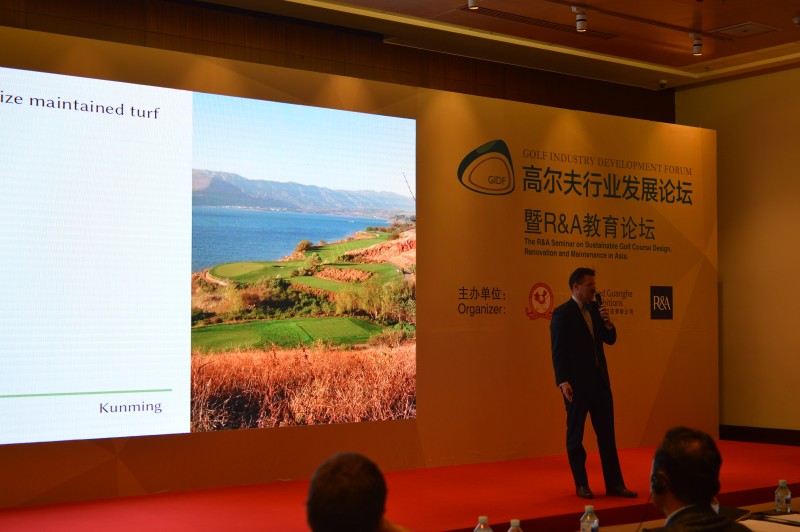 Optimum playing conditions with minimum inputs: handout and slides from seminars in Beijing and Bangkok

The R&A Seminar on Sustainable Golf Course Design, Renovation, and Maintenance in Asia was held March 3 and 4 in Beijing and will be March 10 in Thailand.

This is my handout for the five presentations I made at this seminar. Links to all my presentations are in the handout, and I've embedded a couple of the presentations below, or you can find them all on Speaker Deck. 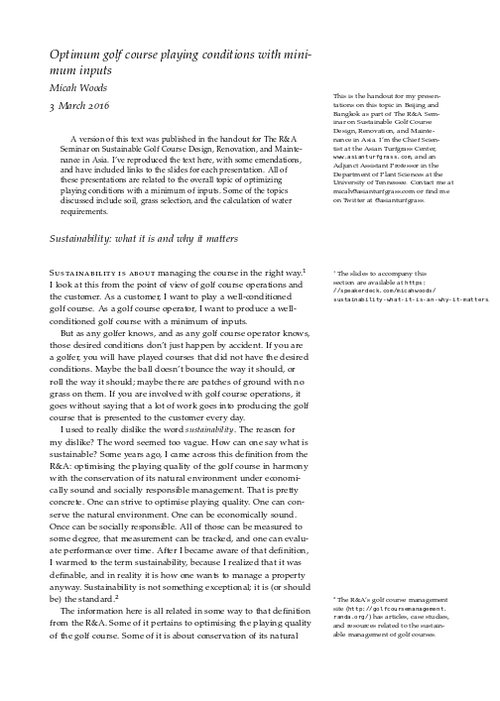 Update from Beijing – Day One of The R&A Seminar on Sustainable Golf Course Design, Renovation & Maintenance in Asia

It was an exciting day in Beijing and I was glad to be a part of this seminar. Here's the day one update from The R&A. 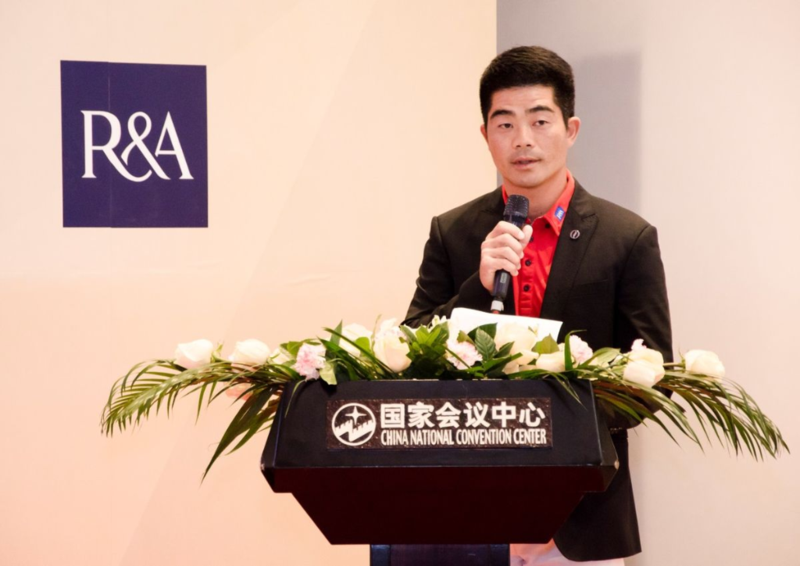 2 March, 2016, Beijing: The R&A's Sustainable Golf Seminar teed off in Beijing with a team of renowned sustainable golf experts sharing best practice, responsible and practical approaches to golf developments, renovations and course management. A mix of golf course operators, academics and other stakeholders listened and engaged with the speakers on lively discussions on what sustainability is and why it matters, opportunities and threats specifically in China, and a drill down on best practice on project planning and course design.

The quote of the day came from Professor Hu Lin, Director of Green Environment Center of China Agricultural University at the end of his presentation which was packed with statistics on land and water use of golf clubs, and lower grade and contaminated land in China.

“It is unnecessary to use any arable land for golf course construction in China. If only a small part of waste land and other poor land is used, it will be large enough for the development of golf industry in China.” 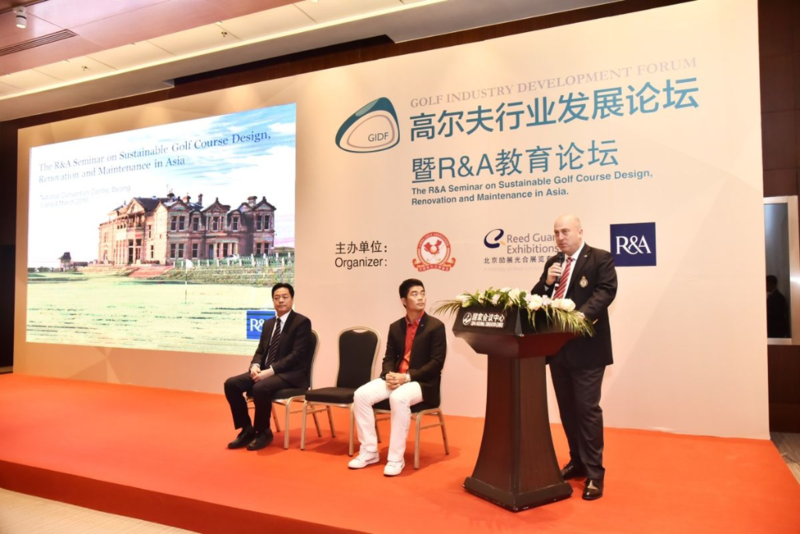 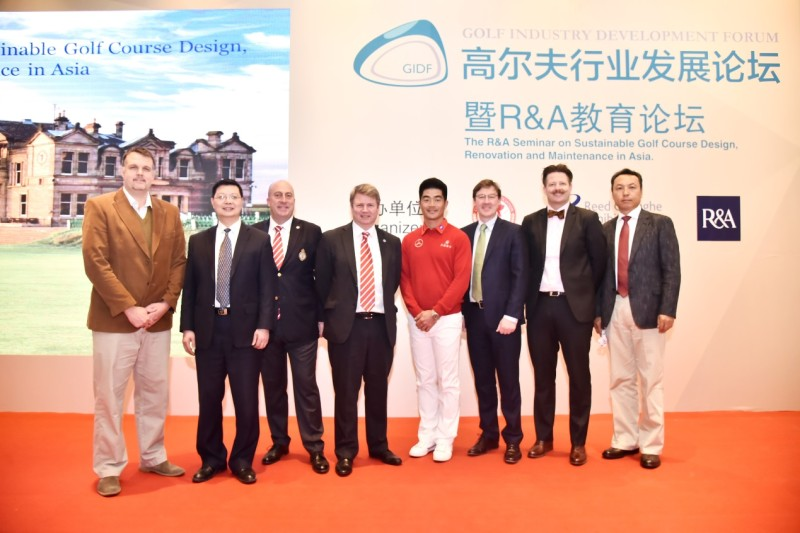 The R&A Seminar on Sustainable Golf Course Design, Renovation and Maintenance in Asia

There are a lot of seminars happening in Asia in early March. Two new events are available this year, one in China and another in Thailand. These are The R&A Seminar on Sustainable Golf Course Design, Renovation and Maintenance in Asia.

The first is on March 3 and 4 in Beijing:

The R&A is to host a free to attend seminar in China that promotes responsible and practical approaches to golf course design, renovation and maintenance - highlighting the ongoing work of the industry in raising the expectations for golf.  This seminar will provide the most comprehensive sustainable education event in Asia across golf developments, renovations and course management.

The R&A Seminar on Sustainable Golf Course Design, Renovation and Maintenance in Asia will be held in Beijing on 3 and 4 March, as part of the China Golf Show at the National Convention Centre. 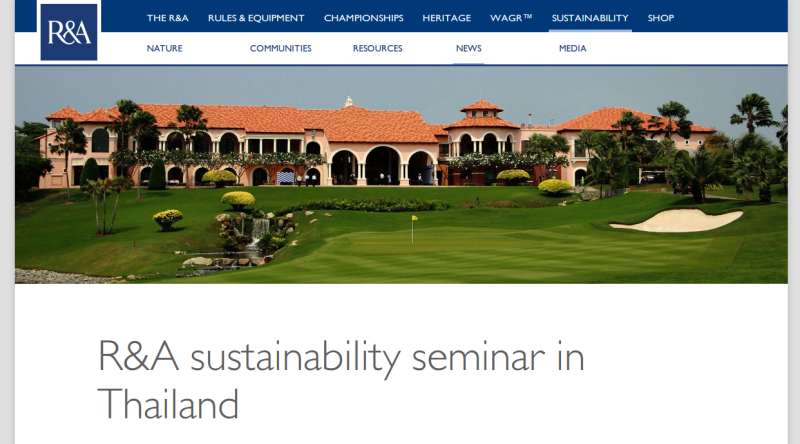 The second is on March 10 in Thailand, focusing on "golf developments, renovations and course management."

The R&A Seminar on Sustainable Golf Course Design, Renovation and Maintenance in Asia will be held at the Amata Spring Country Club on 10 March.

Both seminars are free to attend. 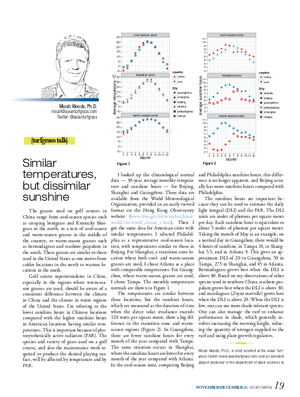 In each of these pairs, the temperatures are similar. In the transition zone and warm-season zone pairs, the sunshine hours are quite different, and it is the locations in the USA with higher sunshine. From the sunshine hours, one can estimate the daily light integral (DLI). As I wrote in the article:

Read the full article here in Chinese or in English. 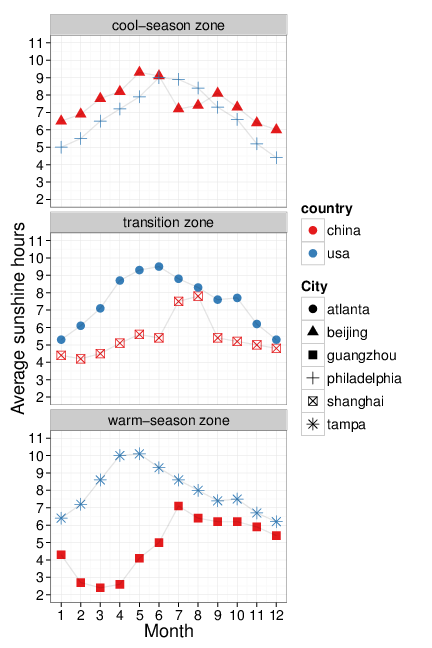 Bentgrass in hot and not so hot places

Creeping bentgrass is a cool-season grass. When temperatures are hot, it doesn't perform well. I was asked if bentgrass in southern China was comparable to bentgrass in Spain. I don't think that is the right comparison. It would be more appropriate to compare southern China to Florida.

I downloaded the 2014 daily temperatures for the international airports at the cities shown in this chart, then plotted the cumulative sum of the mean temperature for the year. 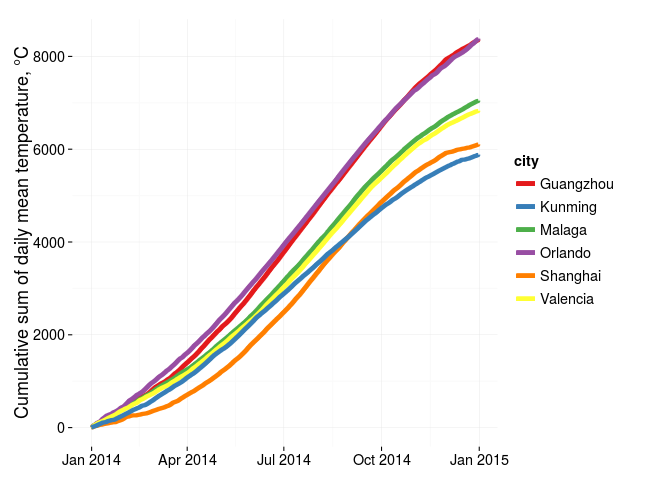 For 2014, here's the number of days with a low temperature greater than or equal to 22°C. I'd look at anything more than 60 days in a year above that level as being difficult for bent. 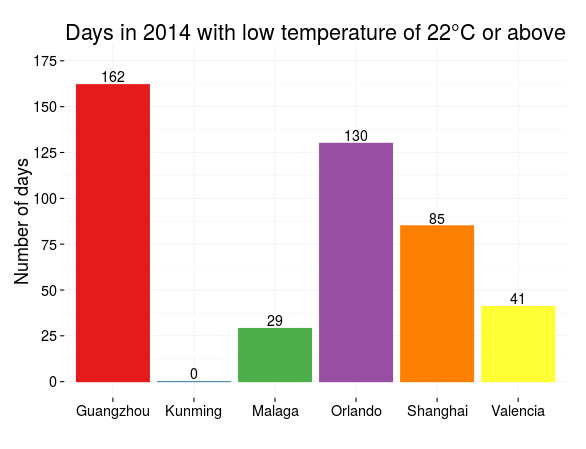 This way of evaluating the temperature fits pretty well how one expects bentgrass to perform in these locations. Perfect in Kunming, the "Spring City." Pretty good in Spain. A challenge in Shanghai summers, with some warm-season greens there also, but possible with good management. Not used in Orlando. And I wouldn't want to try it in Guangzhou.

For more about temperatures and bentgrass, see: 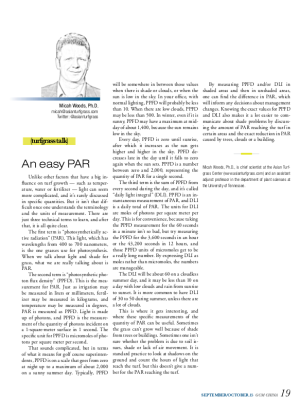 That's the title of my column in the September/October issue of GCM China. I wrote about light:

"It isn’t that difficult once one understands the terminology and the units of measurement. There are just three technical terms to learn, and after that, it is all quite clear."

Visit the GCM China website to read the full issue, or download PDF versions of the article in English or in Chinese.

On a recent trip to China, I was browsing through Golf People magazine and noticed a familiar article -- Using Minimum Levels for Sustainable Nutrition -- translated into Chinese. 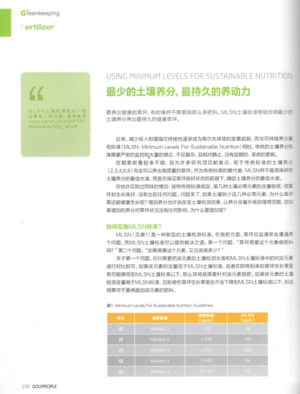 This is the original article in English, from the January 2014 issue of GCM.

I also wrote an article on this topic for the Asociación Española de Greenkeepers (AEdG), which they have translated and published in their Greenkeepers magazine.

With Mandarin, Spanish, and English articles about MLSN and how to use the guidelines, this information is readily accessible to speakers of the world's 3 most used languages.